Lesley Pymm reports:  This was a series of three trail runs and ended up giving me the opportunity for three new parkruns as well as the races.  Also four great weekends away.  Four?  Yes, the first event was postponed and we went anyway as we had accommodation booked and so we walked on a lot of the course. 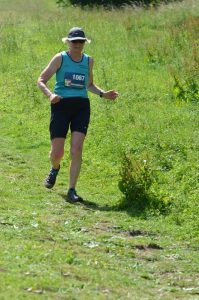 Nailsworth Nelly 10k – This was a lovely run on 24 June, although it was pretty warm and so hard work.  It started off going along a trail that was fairly easy and then it was uphill through woods and then onto a hill. Loads of climbing and then through a village churchyard and back out onto some undulating fields.  Back into some woods and then a downhill finish. 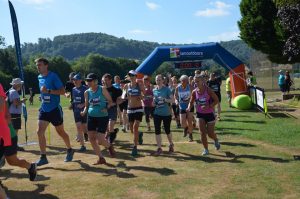 Selsley Sizzler 10k – This was another brilliant run on 15 July.  It started in Kings Stanley village and out onto a trail from the back of the playing fields.  Loads of downhill to start with and then we headed off towards Selsley Common.  This meant a really hard climb up to a long barrow before heading off along the ridge on the top.  It was very warm, and I was so pleased to get into the woods where it was shady.  Loads of lovely trail running through Pen Wood and then Stanley Wood.  The only real problem I had was that there were some steps cut into the hill that I had to climb (I’m not good on steps and would rather just go uphill).  Back down to Middleyard and then over the fields again to finish in Kings Stanley again.

Cranham Beast 10k – this event was the one that had been postponed.  It was now on 22 July and started from a campsite near Cranham.  We camped there for the weekend so I was really handy for the start.  This was supposed to be the hardest run of the three, but I found it easier than the previous one.  Again there was a massive downhill start which was a bit worrying as I knew this meant there would be a lot of climbing later.  We crossed Whitcombe Reservoir and then the remains of the Roman Villa before climbing up onto the Cotswold Way to go round to Coopers Hill (where they do the cheese rolling).  Into Brockworth Wood and then Buckholt Wood.  It was a lovely run but I was pretty isolated.  There was one bit where I saw the arrow pointing to the right and so I headed into the wood in front of it – only to end up in a bog.  It must have been the only wet ground for miles around and I managed to find it.  I realised that I should have gone behind the arrow, where there was a path!  I clambered through the undergrowth and got onto the path.  Then it was a steady climb and run back to the start/finish area.

I was surprised to see people coming in behind me who I thought were in front.  It seems that they went wrong.  When I saw the final results I saw that I had actually won my category on that event and for the series.  There was someone else and she was much faster than me, but she got very lost on the final event and this meant that my total time was better than hers.  I don’t know if there were prizes or not, I didn’t see anything.

It was a lovely series of races and I would certainly do it again. The three medals (for those who like that sort of thing) all fit in to eachother to make a complete ‘Trailmainia’ medal.