Lesley Pymm reports:  I had been worrying that I may find the weather too hot for this event and was hoping for a bit of a breeze on the coast.  Oh how wrong I was!  The weather changed dramatically.  We went as far as Sedgefield on the Friday evening and both of us ran parkrun there in gentle rain.  It was a lovely park and a very friendly run, some of them were doing the coastal run as well.

We then travelled up to Alnwick where we were staying.  On the Sunday morning I got up really early to drive the few miles to Alnmouth, leaving Mike in bed.  We were taken by coach to Beadnell where the run started.  The weather was not good – but I put sunscreen on just in case.  I had made arrangements to start an hour earlier than the main race as I have been so slow lately and there was a 3 hour cut off owing to the tide.  The run was supposed to be something like a short 14 miles – but as it was self navigate, there were no mile markers or direction signs.

I had hoped to have a posse of other runners starting at 9.30 but there was just one other guy there – there was supposed to be another but no sign of him as we started.  The other man had said that he had an idea of the route so I tried to follow him.  That was OK to start with, but he disappeard and I just had the remains of his footprints in the sand on the beach.  The wind was horrendous and I couldn’t hear anything apart from the noise of the wind bashing against me.  I could feel stinging on my legs as the sand was blown up against them.

After a couple of miles on the beach, I climbed up onto the sand dunes and was following very narrow paths on top of them.  I was pleased to be a bit sheltered from the wind, but was making very slow work of this path when I saw another runner with a number on above me and obviously on a better path.  I clambered up and joined the third early starter who had been chatting and missed the early start.  I was very pleased to see him as we ran at about the same pace and he knew the way!  Result!

There should have been a drink station at Low Newton, but it was not set up.  The bag was there to put empties in but no sign of a drink.  Good job it wasn’t that warm.  It was then back onto the beach.  I could see Dunstanburgh Castle looming out of the mist ahead.  After a while on the beach it was back onto the dunes and the path and around a golf course before climbing up to run round the Castle and then on to Craster.  I was very pleased to get a drink here.

It was not long after this (just over 1/2 way) when the leader ran past me.  He was absolutely flying and was a long was ahead of others.  It got a bit more difficult now as the paths were quite narrow and the fast guys had to get past me.  I had to stop from time to time.  I lost sight of my guide, but at least I now had loads of people to follow.

There was another drink stop at Boulmer and then there was a long road section where I passed the man who had helped me, with a bit of a chat.  Eventually I got back onto the beach which was hard going and ran another couple of miles.  In places this was hard going as it was very windy again and there were rock pools and seaweed to negotiate. 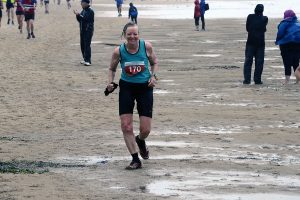 I got to the end and Mike was waiting – he had got the bus over.  The finish was close to a golf club where there was changing and coffe and chips!

It was a great run but the views could have been better if the weather had been sunny.  There were quite a few who had started at the official time and who were beind me on the results.  I think I would have been faster if I had not been running against the wind for so much and if I had known the course – maybe next time!