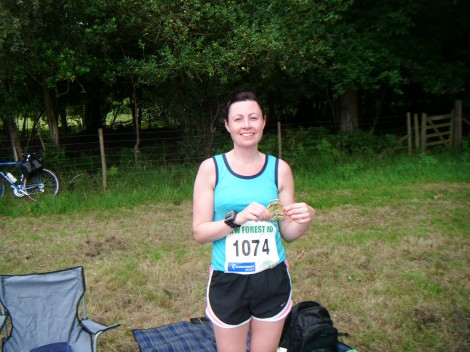 Sarah Rock reports: Since being injured in the London marathon I’ve had 6 weeks of no running and 6 weeks of toddling around by myself at a slow pace over short distances with only my ipod for company, so I wasn’t sure how my first race back would go….

I had booked into the race ages ago and thought that since I had managed a rep session up in the Peak District with Helen Foot earlier in the week, I had no excuses for not using my place. And where could I find a more beautiful place to race in, than the New Forest in Hampshire. As the nerves set in, I was gutted to learn that there were no ipods allowed, and that I would have to go it alone without Jimmy Sommerville, Madonna and Culture Club, which had nursed me back into running over the past few weeks!

It was warm, but thankfully not sunny, when we started off on our jaunt into the forest. The first three miles were hard, but I just kept telling myself that I always take ages to warm up and that I would feel better as the race went on. My trusty garmin told me that I was averaging about 7.40 per mile and I wondered how long that could last, when I came across a Highland Cow, with massive horns! It seemed unperturbed by the stream of runners passing closely by, as did the crowd of ponies that were wandering around and across the road!!!

At five miles, my pacing was consistent and I knew that last year’s time of just over 1hr 18mins was in sight – I knew that it was now all down to: 1) how hilly the second half of the race was; 2) how hot it got; and 3) whether the uncomfortable feeling I was having would turn into my having a ‘Paula Radcliffe’ moment! At 7 miles it got hot (and the farmer who hosed down runner as we passed last year was nowhere in sight!) and at 8 miles there was a big hill – but I managed to keep up my pace, battling with another lady from Sandhurst Joggers, back and forth for the last few miles.

As I attempted to sprint away from the lady from Sandhurst into the field towards the finish, I was chuffed to see 1hr 15 on the clock and knew that I had missed my PB by a matter of seconds, not bad for a comeback race! BBQ afterwards topped off a good day, with Aaron narrowly missing out on a V40 placing being a mere minute outside the hour.