Less of a race report, more of a diary of events. Apologies if it’s a little self indulgent, but I wanted to record my experience.

Llanwrtyd Wells has a reputation for staging sightly strange sporting events in an effort in increase tourism in the town. Man vs Horse was dreamt up in 1980 after a debate in the local pub about the relative merits of men and horses running over mountainous terrain. One man suggested that over a significant distance cross-country a man was equal to any horse, and so it began. There is a real incentive to try and beat the horse, as this year’s prize money for a man to beat a horse was £25,000! £1,000 gets added on each year that a horse wins it.

This was a big one for me, so I had been training hard since Christmas. During my runs I had completed and won the following: man vs barge, man vs rat, man vs squirrel and man vs moorhen. I did not win man vs goose with goslings.

With a sliced Soreen open on the passenger seat I drove through beautiful Herefordshire as the geography became more and more extreme the closer I got to Wales. My canal tow path training now felt a little inadequate. As I arrived in Llanwrtyd Wells I could see lots of runners milling about in the evening sunshine – it was a lovely sight. There was a great atmosphere throughout – especially at the ‘pasta party’ that evening – it was included in your entry fee. Here I chatted with other runners as we poured over the route map and the elevation graph, while trying to size up the opposition and eating mountains of beef lasagna.

The race started at 11am the next morning, so after making the most of the breakfast at The Belle Vue, I tried to kill time and steady my nerves (it didn’t help that the PA system was playing ‘Another One Bites The Dust’) by going to find some horses to pat. They were all ‘massing’ by the train station – it was quite a sight to see so many beautiful horses all being unloaded and prepped. There were 65 in total. They looked to be mainly leggy Arab type horses – most suited to this type of endurance event apparently. No Shetland ponies unfortunately…

My Mom and Dad had driven over to see me run – in fact my Mom hadn’t been back to Llanwrtyd Wells since the 1960s when her and her friends used to spend 6 weeks pony trekking over the summer. She said that not much had changed. Three layers of factor 50 later and wearing teal, I lined up at the start with 356 other runners who were doing the whole distance. There was a lot of energy gel strap-on action and bladder backpacks to be seen. I just had my Lucozade Sport and half a packet of dextrose tablets. You could also (sensibly) enter as part of a three person relay team – there were about 100 people doing it this way, and their team mates had been bussed away to 2 other points on the course. We watched as the horses all clattered into town to get to their start point. Lots of wide eyes, flared nostrils and jostling! Very exciting to see and hear on the narrow streets. After a race briefing from the organisers we were off!  The runners have a 15 minute head start on the horses thank goodness, so we all headed off out of town and were quickly off the road and onto a track. The first climb of 500 feet was steep and a rather rude awakening after the joviality of the start. It now hit me that this was going to be a very hard run.

There was plenty of camaraderie between all competitors, and when 15 minutes had passed I could feel the atmosphere change as we knew the horses were now on their way and catching us up. This first leg of the race was punishing and it was now 22 degrees! We eventually heard shouts from behind us that the horses were coming – runners had to try and run on the right hand side, but on narrow paths it was difficult to get out of the way! It was a real adrenaline rush to have powerful horses galloping past you so closely that you could feel the heat from their bodies and get a flick of their tail in your face!

It was either very steep uphill or extreme downhill but the terrain was varied:  hard, dry and dusty tracks, cool forest paths lined with bouncy pine needles, tussocky open moorland, boggy trenches, bramble and gorse lined narrow cuttings (ouch!)  and wobbly, rocky mountain paths which meant you had to do some climbing. There were also the river crossings. Two of the river crossing coincided with the relay changeover points, so there were lots of spectators cheering you on as you inevitably slipped on the rocks and tried to stay mainly upright. The heat was taking its toll on the horses and most riders were out of the saddle and using their riding hats as buckets to dowse their horses to cool them down. This meant that although the horses would thunder past you at certain points, you found yourself overtaking them again at others. One of the riders i’d met at the station earlier in the morning slowed down and trotted next to me for a chat whenever we met up.

The pain of the uphills was balanced by the breathtaking views you were rewarded with at the top. It was truly stunning and really made the race for me. I was probably slightly delirious, but I did exclaim out loud at quite a few points just how beautiful it was. The endless valleys, the bright patches of late bluebells, the lush green grass, the bird song and the beautiful smell of the forest, the thin trail of runners and riders snaking off into the distance all striving to achieve the same thing….

At about half way at 12 miles in a cool section of pine forest there was a vet check for the horses. Riders had to take everything off their horse and wait for their heart rate to slow down to 64bpm, as well as have a vet check them over for any signs of lameness or injury. From what I saw, a few horses had lost a shoe and were unable to continue. An S4C film crew were also at this point, I did my best to get some teal on telly but I can’t see myself on ‘Heno’ that aired on Welsh TV on Monday night: http://s4c.co.uk/clic/e_level2.shtml?series_id=511152681 (about 28.15 minutes in for the section on the race). I would have liked a doctor to check me over at this point, but no stopping for the runners!

The next section contained a lot of twisty switchbacks through some barren deforested areas. The paths were rocky and littered with branches and tree stumps. You could spot glimpses of riders in the distance as they kicked up clouds of dust. It was so hot and relentless, my face was brown with dust, mud and dead flies. This was a tough bit and thoughts of ‘The Road’ by Cormac McCarthy were on my mind. On a positive note my Garmin was now counting down the miles and I had less than 5 miles to go – I was going to do it! But then suddenly I was hit by an unknown and painful feeling in my thigh. I think it was a cramp, but it meant I was forced to stop running. I found some shade and did my best to stretch it out for a few minutes, then hobbled on. Eventually it eased and I only had to stop once more to stretch it – phew! I think the knowledge of being only a few miles from the finish spurred me on, I was not going to be a DNF!

A rewarding speedy downhill section took you back towards the town and closer to the sounds of the finish and the smells of burgers. One final, quite deep, river to cross where I did my best to wash off various bugs and sludge before emerging from some trees. There were 3 other runners with me at this point – we had been amicably together for the last few miles, so I mustered everything I had and did a parkrun-style finish on them that they weren’t expecting, and crossed the line!

I soon found out that a horse had yet again won the race in 2 hours 18 minutes. The first man crossed the line in 2 hours 46 minutes. I finished in 4 hours 26 minutes which i thought was a tortuously long amount of time, but in fact I was roughly in the middle of the field – and finished before 8 horses! Brilliant!
The race is usually 22 miles, but this year due to some forestry activity, it had to be extended to just under 24 miles. It’s certainly a challenge and not for the faint-hearted. 21 horses and 87 runners didn’t finish!

A fantastic one-of-a-kind race, really well organised, very friendly, lots of water stations and marshalls, stunning scenery. I’ll be back next year – but maybe to do the relay…..

http://www.onlineraceresults.org.uk/ – click on ‘results for 2013’ to see Man v Horse 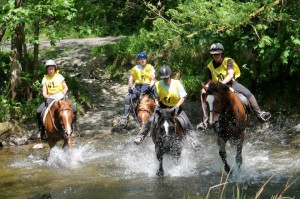 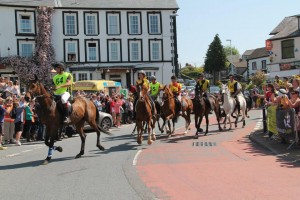 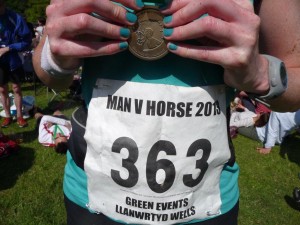 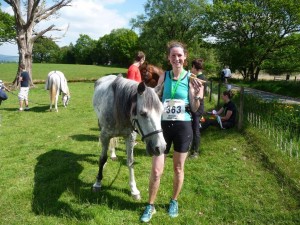