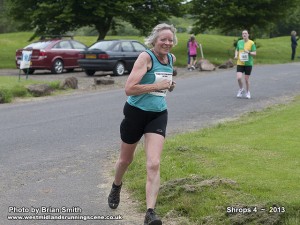 Lesley Pymm reports:  Another Wednesday evening and another trek up the M6 and into Shropshire for the third of the Sexarathon series.  This was a 4 mile multi-terrain race in Granville Country Park.  The race HQ was the Shropshire Golf Club, where there are very good facilities.  It is a fair walk/warm up to the start of the run though.

The warm up to the start meant that I could check out the course – I had driven up (and I mean ‘up’) part of it on my way in, so the run to the start was the chance to view the more picturesque part.  It goes through land that has previously been reclaimed from mining, so there are still the remains of an old winding house and other buildings.

We gathered at the end of the road that leads up to the golf club and waited for the start.  Unfortunately I did not hear the start as the device failed and I just saw the front of the field start to move, so started my watch!  There was a long climb up the road and round to pass the finish for the first time.  Then it was onto the trail section, which was lovely and generally downhill.  We came back onto the road we had started on at about 1/2 way up the hill and round again twice more.

It is not a bad little course.  Although there are laps, it does not get too boring and in the second and third lap the hill is not so bad as the first time as it is shorter.

This is a good series with primarily entrants from Shropshire and Staffordshire clubs, a smattering from elsewhere.  There are three more events to go!