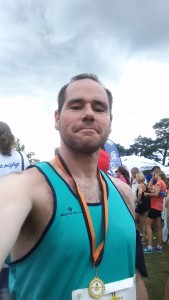 Knowing that I would be working in Sweden for more than a week, I thought I would have a stab at mixing business with pleasure, and found a beautiful looking 10km race to enter. Solsidan Runt translates as Sunnyside Around, and the weather on the weekend of this race befitted the name perfectly.

Solsidan is a train journey with two changes away from my hotel, and the locale could hardly be more different. I was based in a truck stop / industrial / warehouse estate, longstanding home to two stolen, wrecked cars, in a room overlooking a railway line. So naturally, I tried to spend as much of the weekend as possible in the race area.

The start and end of the race were in neighbouring Saltsjöbaden (Sea Salt Baths), which provided sheltered changing facilities, with their large wooden multi-storey huts, on the tiny island called Restaurangholmen (Restaurant Park). Men and women had dedicated huts, separated by a small beach.

The evening before, I tried a mix of carb loading and local cuisine at a little restaurant on a jetty in Restaurangholmen. Not too familiar with seafood, my zoological curiosity led to me playing with my food as much as eating it. A quick shout for help on facebook yielded no rapid responses, so I took the plunge and consumed what I had identified as razorclam anus. Although I had taken care to squeeze out any contents beforehand.

Cutting into my main, led to me imagine the graph describing the relationship between the number of minutes saved by cooking my burger “medium rare”, versus the number of minutes it would cost me due to digestive discomfort in the race. I figured this instance was still just about on the flat bit, before the steep incline. Either way, it would likely be outweighed by the effects of my unfamiliar starter.

There were a range of races on the day, from 250 metres for the youngest kids, 640m, and 1230m for older kids, then 5km and 10km for us grown ups. There were just over 100 competitors in the 10km event, and we were led through a dynamic warm-up routine in the start area outside the Grand Hotel.

The first section of the route hugged the picturesque coast, filled with moored boats. Then we were onto roads, which were not closed, but quiet enough to not be a concern. These roads undulated, following the irregular coast for the remainder of the first half of the course.

Now, we’ve all high fived spectators in the past, but the forthcoming celebratory gesture as I careered downhill was the most frightening one. This person with their expectant hand reaching out, was on a motorbike! I was a little concerned about making too firm a contact, but we survived the incident.

Then we headed inland, and were faced with a couple of challenging hills, and several stunning unique houses.

The final section was back on Restaurangholmen, skirting the outside of this little island, before turning sharply uphill to the finish.

The finish area was an intimate amphitheatre with a cheery crowd. Medals were handed out at the end of the red carpet at the finish line, but it was necessary to climb the steps for your finisher’s goodies. There was the usual bottle of water, but the slightly more unusual half, yes half a banana, and a hotdog. I think there were also sunglasses and a sports bottle, but I missed those. 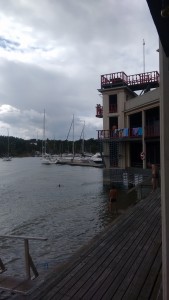 I headed over to the changing rooms, which look straight out onto the sea. I entered the sea using the steps, rather than the more exciting option; Being alone, and unconvinced that my work’s travel insurance would cover it, I decided against the option of “Balconing” into the sea. Despite the 20 ̊C+ land temperature, the sea was freezing, and it took me 10 minutes to get fully immersed.

It’s a little thing, but seeing (ENG) after my name in the official results was a interesting surprise, and it’s my first pin in the Teal On Tour map.

One Reply to “The Solsidan Runt by Dave Powner”