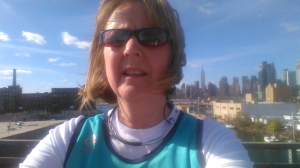 Well to say I’d been waiting a long time for this one is a bit of an understatement!! I’ve been dreaming about it since my first marathon in 2008 and eventually tried to make it a reality in 2011, reading somewhere on the website that 3 consecutive,   unsuccessful applications guarantees a 4th year place!! So I applied again in 2012 and 2013. I don’t know why but it took me by complete surprise when my guaranteed place was offered at point of entry!!  Accept or decline!! OMG! I phoned my parents and asked whether they fancied a trip to NY next year to support my marathon?  I did not want to go alone and as my partner works in a school, didn’t know whether he’d be allowed time off!!  They were up for it so I ‘accepted’ there and then.

End of June 2014 I started my 18 week training plan.  I had lots of running support from BvH runners and was able to complete my longer runs with the ‘Sunday Crew’ who were also long distance training for events various.  I was not looking for a particular time, just the experience but as runners, we all know, that of course I had a secret time in mind and then also an ‘acceptable’ time!

Essentially my training had gone well but I started to notice a ‘niggle’ in my right knee. It wasn’t painful but I was aware of it and it ached after training. I booked regular appointments with Ben and followed his advice to the letter.

October half-term eventually arrived. My partner and kids had also managed to secure leave, so off we flew, all 6 of us … New York bound!  We had loads planned before the marathon including the Expo to collect my number. This was an exciting and emotional experience!! There were loads of opportunities for photographs, including one where I had to step up onto a platform.  I felt my right knee ‘crunch’ as I pushed up on it, to get onto the stage. Disaster! It was painful and difficult to walk!!  I ‘played it down’ in front of my family and hoped I could walk it off.  By the end of that night I was in a lot of pain and totally distraught.  I cried a lot and thought my marathon experience was over!! The next day, I put on a brave face and with strong pain killers, knee support, pain relief gel and a loads of rest stops we continued exploring New York!

Once my news reached FB, I received loads of support and advice from so many of you!! Thanks, it really did help. I had to alter my mindset and adopt a new race strategy. Run, walk or crawl, it didn’t matter, just enjoy the experience and get round. It was after all, the NYC marathon!!  I abandoned the opening ceremony on the Friday night not wanting to do additional walking and I spent all day Saturday in the apartment which helped a great deal.  Later that day, I put my knee to the test on the treadmill. It was uncomfortable but held up and I seemed to warm into the 1 mile run.

Race day came. I was extremely anxious because I had no idea how my knee would behave. It was a very early start and I had to negotiate the subway, sniffer dogs, Staten Island Ferry, bus and NYPD officers with metal detectors and that was just to reach the start line…me and 55,000 other runners!  Sailing passed the Statue of Liberty en route was surreal!!

I have never started a run wearing so many clothes!! We had been warned about the high winds and boy were they high and so cold too.  I had planned to put my hoodie, scarf, long trousers and gloves in the ‘goodwill bins’ at the start but it was so cold I kept them all on for the first 2 miles. This was over the Verrazano-Narrows Bridge, the longest and windiest suspension bridge in the US. By mile 3 I had started to warm up, and clearly, so had thousands of others, as the road was covered in discarded clothing; you really had to watch your footing.

The first 6 miles were tough as my knee was sore and I was worried that it might get worse or just ‘give-up’ altogether but it didn’t and gradually the discomfort lessened so by mile 10 I felt much more confident. I was running at between 11 and 12 minute mile pace which was slower than originally planned but at least I was running! By the half way mark I was feeling ok and the crowds were amazing.  The whole route, which took us through all five boroughs of NY, was lined with people cheering, clapping, yelling words of encouragement and holding inspirational signs, some really made me laugh! ‘Toenails are for wimps’,  ‘I think you thought they’d said rum’ ‘I’ve trained really hard to hold up this sign’  ‘you are my hero random stranger’ and ‘alcohol at the finish’ (a particular favourite of mine)!!

My half-marathon time was 2hrs 16mins so if I could keep this pace going, by doubling and adding twenty I was looking at an under 5hr marathon. This was good as I had said to my family that they might be out there for at least 6 hrs!! At 16 miles I stopped on the Queensboro Bridge to capture myself with the Manhattan Skyline in the distance, an amazing view!  It was tough on my knee starting again so tried to keep going after that!  I was due to see my family at mile 17-18 so was able to run faster, keen to see people I knew. I searched the crowds on the left but did not spot them.  This was tough, so to alleviate my disappointment, I put my music on, dug deep and let Wham help me on my way.

I passed over two more bridges and to my delight saw the 23 mile marker. Not far now. I had also arranged to see my family at mile 24 in Central Park. Once again the thought of this enabled me to pick up the pace and I entered the park feeling good. After a couple of minutes, I saw them all, waving Union Jacks and shouting words of praise and encouragement. We were all very emotional but with only 2 miles left I set off with gusto to reach that elusive finish line. I cried several times between here and the finish line. The last 385 yards were uphill but I didn’t care. I could see the finish line. I’d done it!!   04:43:34!!  I was happy and relieved!!  I would recommend this marathon to every runner I know. It was fantastic!!