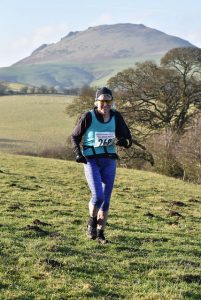 Lesley Pymm reports:  This was the first time I had done the Cracker, and I really enjoyed it.  It started in Cardington, near Church Stretton.  It was pretty cold at the start and we knew that we were going up to 1506′, so could be a bit nippy up there.  I decided to wear a bit more than I had at XC the day before!

We all congregated in a field on the edge of the village and waited for the start. In the briefing we were warned that it was still icy up there and to be careful, particularly on some of the downhills.  Then we were off.  Over the field and then we were out into a lane and it was muddy.  It has been so dry lately that I have not seen mud for ages.  It was great sloshing around in it.  We crossed open pasture and then a farm track until we dropped through Hoar Edge, which is a narrow woody section, and quite difficult to negotiate. 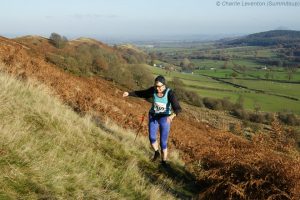 We dropped to Comley Farm and ran through fields towards Caer Caradoc.  The route followed the lower green lane around the base of the hill to the sheep pens and then took a diagonal line directly to the summit. at 1506′.  I was pleased to see that I was gaining on others on the hill and eventually got to the top – my slowest mile!  The second checkpoint was up here.  Then it was along the high ground to Three Fingers Rock, and a steep descent to the stream before again climbing – this time up the side of Helmeth Hill to Gaerstones Farm, this was all pretty familiar to me as Mike and I had walked up here in the summer.  The third checkpoint was at the farm where we were directed up Gaerstones Hill to the Hope Bowlder Ridge to Willstone Hill.

There was a couple on Willstone Hill who were walking and having a break.  They told me I was mad (and I said that people had said that before) but also amazing (which was nice).  The man then started to point out to his wife where we had run – and all the route was laid out beneath them – of course, I didn’t hang around to admire the view but carried on to the final checkpoint and the Battlestones.  We descended here and this was certainly the most slippery that there had been.  It was still in shade and was decidedly dodgy!

Then it was climbing again to the Wilderness and after that it dropped through fields and over stiles to get to the finish in Cardington.