Lesley Pymm reports:  I headed over to Priest Weston for the Corndon Race.  This was the second time I had run it, and had found it pretty daunting last time as the conditions were very poor and I was very isolated on it.  I hoped that there would be more slower runners out and that the conditions would be better.  Although the mist of the day before had added to the enjoyment of parkrun, I really didn’t want that on the tops in the Shropshire Hills.

It turned out to be lovely day.  The race starts at the Miner’s Arms in Priest Weston and goes uphill virtually from the off.  We ran up a track and then turned off to head to the trig at the top of  Corndon.  Joy of joys, there were slower runners out there and there was a back runner.  Although I didn’t want to be running with him, I was very glad that he was there. 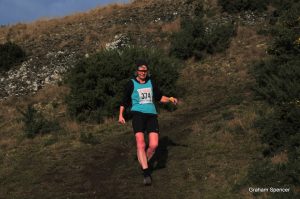 Over the top of Corndon and we were running downhill towards Corndon Cottage.  There is then a bit of track and then road before turning off and onto the climb up Roundton.  At this point I had the sun in my eyes and couldn’t see a thing – I just kept climbing!  Over the top and then down to run close to the Nature Reserve car park, and along a woodland path.

It was difficult along here at times, but very enjoyable.  Then it was a bit more road and off onto a track which we followed for quite a long time.  I remembered from last time that we had turned left along there at some point to climb Lan Fawr.  I was following other runners and I couldn’t see any markers indicating where to cut off – but it did look very familiar.  I became aware of shouting and bell ringing from the top of the hill and realized that they were telling us to cut across.  This is what I did and soon got to the summit.  Over there and it was all downhill.  The run is about 5.5 miles – but you wouldn’t know it from the times!  I took about 87 minutes.

Really enjoyable run and I wasn’t (quite) last!  They are saying that it was the last running of it – although I noticed something on facebook today which seemed to be trying to keep it going.  I hope so.