Bournville Harriers men sent two M35 teams and the women a W35 and a W45 team. The men finished 1st and 19th and the women’s teams both finished 10th in their respective races.
Full results can be found here
http://www.bvaf.org.uk/results/resultdetails.asp?cat=5
Each leg involved 2 laps around a twisting and undulating course making it an enjoyable event to watch and to keep track of what was happening overall.

The women were first off, and it was really good to have two teams out there (100% increase on last year).  There was a really strong field out there and some international runners, but each and every member of the team gave it their all.  Special mention to Lesley Proctor who was running her first XC.  This was a really good opportunity to have a go at XC in a short course and we hope that this will be the start Lesley running XC regularly.  Lesley Pymm ran as a W45 – come on, there must be more over 55s out there, let’s have a W55 team next year.  Jude Glynn made up the W45 team, running as enthusiastically as ever.  The W35 team comprised Sarah Rock, Suz West and Laura Gale who all had strong runs.  BvH women’s XC goes from strength to strength, but we were very much the warm up act for our fantastic M35 team.

Aiming to improve upon the bronze medal from last year’s event Sam Chatwin showed the A team’s intention by taking an early lead up the hill in the first lap. Sam held his form well to put the team in 3rd place in the M35 category and 5th overall, knocking over 40 seconds off his time from last year in the process. I managed to gain a position overall with one of the M45 teams dropping out of contention. Sean Rose ran a strong 3rd leg with an exciting finish as around 4 runners battled for places. Stuart Pearson on the 4th leg demonstrated that he could step up to the challenge of the A team and ran a fine leg that kept us in the chasing pack with the Leicester M45 team (last year’s overall winners) and Tipton forging around a 20 second lead from the rest. With Dean Parker who is in great form running the 5th and final leg it gave us real hope of closing the gap. Dean, as always, didn’t disappoint and by the end of lap one had eased into first place in the M35 race and had the Leicester M45 runner in his sights.   It was a great sight to see Dean emerge from the woods before the finishing stretch in first place! He finished with our fastest leg of the day and had built up almost a 30 second lead and so could enjoy a well earned celebration as he crossed the finishing line!

The B team finished a creditable 19th in the M35 race considering that 4 of the 5 could have run in older age categories (we didn’t quite have the right combination to field a complete team in a different category so we should try to improve that for next year). John Enright, Terry Doherty and Paul Dugmore who were also in our team at the English National cross country relays continued to show good form from that event and Paul finished with the fastest leg of the day for the B team.  Barrie Roberts on the 4th leg knocked 40 seconds off his time from last year showing what you can do as an M70 (the course announcer did express his surprise at seeing an M70 in an M35 team!).  Kevin Peace on the last leg ran a similar time to last year which was a great achievement as the field was very spread out by this point.

A big thank you to all the BvH supporters who travelled to Derby and to the ladies teams who stayed to cheer us round the course.  They all had to wait quite a long time, as the officials sorted out the results, to see us collect our medals. So a successful and very enjoyable day all round. 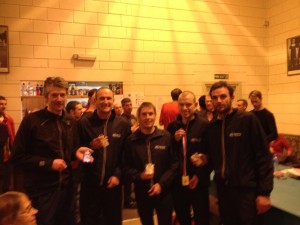 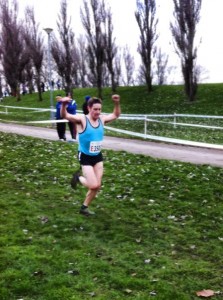