Mud=fun, and the Suicide 6 race at Baggaridge Park did not disappoint, there was mud aplenty and a sneaky water feature for added excitement.

The race itself started promptly, which would have been great, except for the fact that the race announcements were completely inaudible, so the only way we knew it had started was when everyone in front surged forward. All I could hear was Jude’s surprised exclamations behind me until we hit the first uphill and she sailed easily past me. Much of the first mile and a half is a slog along a dismantled railway. To me a dismantled railway conjures images of a lovely smooth sandy or gravelly surface: not so in this race! Instead, this was a mud bath of epic length through thick, grey, clay-like gloop. Immediately everyone stepped to the edges to try to avoid the worst of the energy-sapping mud, but there was no avoiding it, and paces somewhat slowed we plodded on (and a few shoes lost no doubt). After this the mud changed consistency to a more typical brownish squelch and only a fraction less deep. The route of the course twisted and turned up and down, making it hard to keep any hint of speed up.

Sometime later we hit tarmac. Actual tarmac. The sort of nice, hard surface where you can get some sort of speed up, although it does feel a bit peculiar after all the mud! This is the out-and-back section which leads to the water feature, and an opportunity to admire the speed of the fastest runners as they zoom passed in a blur of colours (including some super-sonic teal: thanks for the encouraging shouts guys!) and also estimate the possible depth of the water feature by examining the relative tidelines on the runners. Reaching the end of the tarmac we took a right turn back on to muddy trails. Here I could catch glimpses of a huddle of spectators and hear splashing water and shrieks of encouragement/discomfort/shock/madness as people negotiated the water crossing. I thought I must be reaching it soon, but no, up and down and around we ran, before a final fun (and fast) narrow downhill to the mighty ditch. There was no way of working out an approach strategy, I just ploughed straight into the muddy water and hoped I didn’t sink completely. By sheer good luck I found a crossing of ideal depth: not too deep to soak all my clothes, but enough water to provide some amusement.

After the ditch it was back to the tarmac, before turning off to the right and on to some more muddy trails. The last attempt to finish off us runners was the inclusion of a never-ending flight of very steep steps. This reduced me to a slow plod, pulling myself up by the hand rail. At the top it was hard to shake my tired legs back into action, but somehow I managed some slow stumble that approached a jog. With a jolt of surprise I realised by now that we were near the end, and I could see in front of me the runner who I had been following for most of the race. Summoning some energy from somewhere I initiated my slow-motion-sprint finishing tactic and just crossed the line before her. Despite the sprint being in some sort of slow motion it still lead to the hideous post-line crossing feeling of wanting to vomit, but after staggering around for a bit I managed to recover enough to collect my t-shirt, banana and bottle of water.

Great fun race, and a good turn out of teal (with some super speedy times too!) 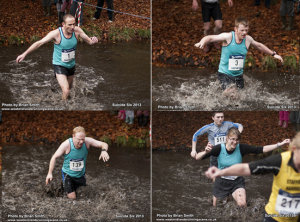 One Reply to “Leonie Clitherow reports on the Suicide 6”