Lesley Pymm reports:  It was good to see that there were a couple of other BvHers running this lovely event.  A quick scan through the programme showed that Anthony Stewart and Clare Mullin had pre-entered.  I did the usual wonder round Tywyn, look at the Car Boot Sale, something to eat a couple of hours before the start (I find afternoon starts so difficult) and then got into the ‘loo queue’ where I bumped into Anthony’s family. Outside again I saw Anthony.  At that stage there was no sign of Clare.

When I got to the start area, I saw Clare and said ‘hello’, but she was standing at the front so I moved towards the back of the runners.  Eventually we were off. The train whistled and we ran.  A gallop through the town and then out, still on road, past the ice cream factory.  Clare came past me.  She had gone to the very back so that she did not start off too quickly.  We chatted a bit and then she went on ahead – no surprise there then!

It was such a warm day.  Last year I did a pretty good time, but it was dry and cool.  This year was dry underfoot but it was very warm, I knew I would struggle.  I was pleased to get off road.  There is a bit, about 3 miles in, where the run route and the train converge and then the runners go off right, uphill.  My plan is to get there at the same time as the second train – that is the one I had booked Mike onto.  The first time I ran it, I put him on the first train, but he never saw me at all.  This year, I heard the second train whistle and realised that I was not as far ahead as I wanted to be.  It was a bit of a scramble, but I just made it to my ‘photo shoot’, then I could relax. 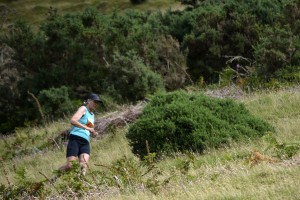 It is a friendly run and I was enjoying it, just felt very overheated.  Eventually I got to Abergynolwyn where we start to return.  This is the harder part of the run.  I was pleased that there was more of a breeze in this direction, though.  I got caught behind a queue of runners who were stuck behind a man who was walking the uphills and running on the downhill and flat.  There was nothing I could do except have a bit of a moan.  I don’t understand why people don’t move out of the way to let others pass where it is not safe to overtake on the move.  The second train passed me along this bit and I tried waving, but nearly went down the side of the hill, so decided against it.

Anyway, eventually it widened out and I was able to get past.  I tried to speed up and see the train again at the Dolgoch Falls, but I had missed it.  Over the bridge and then a clamber up the steep steps and into a slightly muddy track.  The bog came along and was a bit muddier than I expected – that was because of all the runners who had gone through ahead of me in my race and the 10k.  It was good though.

There were bits of climbing, but generally just steady off road running.  Eventually I was back on road and passing the ice cream factory again.  Loads of people outside eating ices!!!  One of the guys I know from Kenilworth ran alongside me for a while on his warm down and chatted, and then I was going back into town again.  Something like 14 miles, mainly off road! 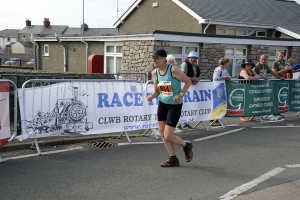 I got back in about 2 hours 57 – which was OK.  Not as fast as last year but in this heat it was fine.  Anthony and family were there at the finish to shout me in.  Thank you so much for waiting – you could have been half way home as Anthony did an impressive 1 hour 54.  He said that he had seen Clare finish and that she did a really good time.

Wolverhampton and Bilston got the team prize!

I also realised when I got home and was looking at the Race the Train website that there is a television clip from Countryfile in 2002 on there.  I knew that I was on this, as lots of people had told me about it, but not having a TV I had never seen it.  It was good to see my moments of fame (wearing Centurion kit as that was before I joined BvH).