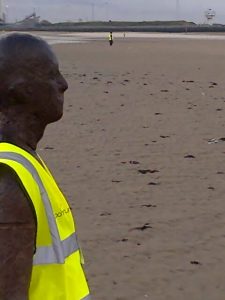 Lesley Pymm reports:  I know we don’t usually do reports on parkrun as we do so many of them – but this one was so brilliant that I want to share it with everyone.  I had been looking forward to it for ages and felt quite excited sitting on the train this morning as I travelled from Brunswick in Liverpool to Blundellsands and Crosby – even the rain was not enough to put me off.  I got there and found the Leisure Centre where it starts and went for a bit of a warm up.  I quickly ran back to grab my phone and take a few photos of the ‘iron men’ – part of Anthony Gormley’s ‘Another Place’.  This is a series of iron men covering about two miles of the beach around Crosby and Formby.  Three of them become marshalls for parkrun – the furthest one wearing a hi-viz crash helmet!  I also tried running up and down the dunes a bit and got my shoes full of sand.  The rain stopped and the sun came out.

After the briefing, we were off.  We started with the wind behind us and ran along the grassy/scrubby section for about a mile.  I had to watch where I was going as there were a few rabbit holes in the sand.  After about a mile we ran through a car park and then turned back to head along a tarmac cycle path on the prom to return to Crosby Leisure Centre.  The wind was now head on and it was hard going.  There were more of the Gormley men to be seen on the beach along here.   I overtook a few people and then we got to the sand!  This was where it got really hard as we were running over sand with the wind full on.  It was also wet in places (I hadn’t brought any shoes to change into).  After I passed the final iron man it was back along the beach with the wind behind me.  The sand was softer though, so it was still quite hard going.

I really loved it and hope to get back there sometime.  It is one of those runs that will always be different owing to the natural environment.  Apparently last week the wind had blown the sand into little dunes that the runners had to negotiate and the first runner was about 5 minutes slower than usual.  I didn’t hang around for coffee as I thought I had better get back to the hotel to get into dry shoes.  Very friendly though.