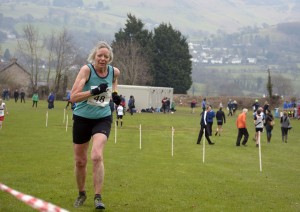 Lesley Pymm reports:  It was a shame that we couldn’t get teams out to the British Masters Champs as it was a brilliant course.  It was a real XC course over farmland which animals had used rather than just playing fields.  The competition was very high standard with lots of international runners there.  Really enjoyable.

As I approached Ruthin in North Wales I was looking at the mountains and wondering what on earth the course was going to be like.  The race was based at Ruthin School which turned out to be situated in the valley so the course was effectively pretty flat with great views of the mountains – if you were able to look up and admire them.

The women and M65+ went off first and our race was a short 8k.  We went around the school playing field almost twice, then out and into the next field which we went around and then it was out along a track for a while.  This had mud in the middle so it was OK with spikes.  The course then took us into real fields with real shiggy!  It was pretty muddy and good running.

Around there, back onto another track and down to a field that took us alongside the river.  Coming back up from the river there were some little ditches and then it was through the farmyard which was very muddy on the approach and then a stoney bit and then deep puddles before we got back to the first field.

The second lap was a shorter version of the first.  I really enjoyed it – even though I came last in my category.  There were some amazing runners there.  My race was won by Claire Martin in 22.52.  The first M80 was about 5 minutes faster than me – absolutely amazing.  I don’t know where the event will be next year as it works its way around Britain.  It was good that it was fairly local this time and two weeks after the Grizzly!

Barrie – you were missed.  People asked after you!