Lesley Pymm reports on the third and final event in the 2013 Spring Treble:  After a lovely warm day, we all congregated at Oulton Cricket Club on a cold evening.  I say we congregated at the Cricket Club, it may be more accurate to say that runners were congregating in the lobby outside the toilets, where it seemed a little warmer.  I went off for a warm-up and found that once you got off the high point at the cricket club and onto the road outside, it was much better.

The name of this event is a bit of a clue!  It goes over the Downs – a lovely piece of land owned by the National Trust, but it is undulating.  It may be more accurate to call the event the ‘downs and ups’ as it starts on a long, road downhill.  To give some idea of the course – my first mile was 7.51.08 (I can still do sub-8 minute miles with a bit of gravity assistance!!) and the last one, up the same hill, was 10.40.  Between those two miles were two off-road 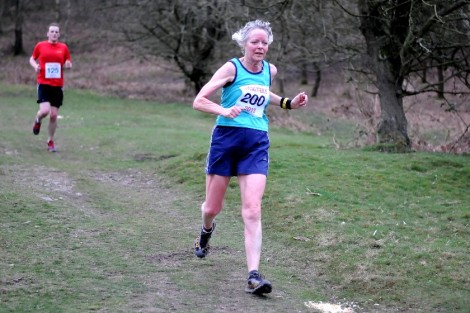 laps of the Downs.

We ran along a track for a while, then turned uphill on a very rutted path.  We then turned right and went downhill on a grass bank.  I remembered this as being quite slippery last year.  It wasn’t too bad this year, although a short shower during the run did make it a bit slippery by the second lap.  I was OK as I had studs on.

At the bottom of the bank we ran a bit further along a track and then back onto the road for a short while before repeating the loop.  On the second lap, when we got to the road we turned the other way and ran back up the hill.  It really is a hard slog – great training for the Hill Race in the Tour!

There was a woman who looked as if she was about my age (it really is difficult to tell) and she had beaten me in the previous two events.  On this one, I got past her on the second lap and there was no way I was letting her get back again.  I really pushed up that hill and when I finished I was panting like mad.

They had not shown the categories on the results of the previous races, so I had no way of knowing.  I beat her and we ended on equal points, but she was still a V55!  She won the V55 category and won the V60 with the same points. I suppose that if we had been the same age group they would have had to do it based on cumulative  time over the three events – and I had just beaten her on that.  I was really pleased!

The presentations are in the bar of the Cricket Club, where they also put on a buffet.  This is a good end to a lovely, friendly series.