It was an early Saturday morning start on our weekend road trip to Edinburgh, for the EMF half marathon. We sat in the car reading the race instruction booklet, entertained by the seriousness of statements such as ‘this is not a fun run’ and ‘an endurance road race of this distance is a serious athletic undertaking’! We were also amused to read the information about finishing the race, which highlighted that ‘medical care would be provided if required’, before there was even a mention of water/medals/baggage etc. However, this would later prove to be an important part of our half marathon story…..!

We arrived in Edinburgh to glorious sunshine, which obviously prompted an immediate shopping trip to buy emergency flip flops and summer tops! A hearty dinner of pasta at our city centre apartment then followed before an early night ready for our 5am start.

Following a less than adequate night’s sleep for all mainly due to nervousness, heat and the early start, we were pretty much the first to arrive at the start line where the race officials were still putting up the flags and testing the sound system. However, the crowds soon started to arrive… and within no time at all the queues for the loos were out of control. With threats of disqualification for anyone caught ‘relieving themselves’ in a public place, we found ourselves still queuing for the loo with less than 5 minutes to start! Not exactly the stress-free start we had planned!

So with a dramatic countdown to 8am we were suddenly off to the inspiring music of ‘Eye of the Tiger’. The first couple of miles were predominantly downhill with nice views of Arthur’s Seat. Then by mile 4 we headed out along the coast line. This was a tough 4-5 mile stretch, as despite the early time of day, the sun was blazing and there was barely a breeze.

Mile 9 took us into Musselburgh, which was the first part of the course where there was actually any decent crowd support. A long stretch of road out and back gave a good chance to see the winners making their way towards the finish, although the turning point seemed to take forever to reach.

Jenny was the first of our group to cross the line – not a pb but a great time given the fact she has been struggling with a bad back recently.

Fiona and Lizzy followed close behind, with a fantastic pb for Lizzy of over 3 minutes. However, general dehydration had hit Fiona hard and she was immediately ushered onto a couch in the medical tent due to swaying from side to side like a drunkard. A lot of fuss and bother then ensued with the St. John’s ambulance crew taking their role very seriously, measuring her blood glucose levels, temperature, pulse etc.

Soon after, Áine obviously also felt obliged to follow the pre-race instructions of using the medical facilities, and was ushered into the medical tent having thrown up over the finish line! There was now quite a gathering of BvH members in this tent!! It was well worth it for Áine though, as she had also achieved a pb by nearly 2 minutes.

Eventually we all made it to the ‘B’ for Bournville reunion area, and agreed that the fab t-shirts and medals made up for the various dramas of the morning. The long bumpy bus ride back to Edinburgh city centre did nothing for our aches and pains and general nausea, but after a few hours rest we did at least make it out for refuelling and post race-celebrations in the evening.

No trip to the Scottish highlands would be complete without some true Scottish weather, and by our drive home on the Monday morning it was misty and pouring with rain. Despite this, we all arrived home in good spirits and are already considering where to plan our next BvH road trip……. 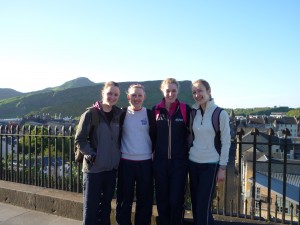 3 Replies to “2013 Edinburgh Half Marathon – The Lost Report”