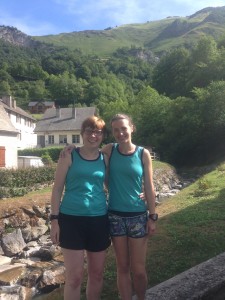 Emily Holden Reports: First, turn up without prior warning in your teal vest at the village of Etsaut in the Pyrenees, where you have heard there is a cheese festival, and a mountain race. Don’t be put off by the bemused faces of the locals when you approach the race registration desk. It’s only 3.8km. An altitude gain of 274 metres sounds kind of steep, but hey, you can take it steady, right? Take a look around you to check out the competition. That guy’s eating a ham sandwich. And that young woman is wearing a lacy bra under her vest – which must mean that she’s no idea what she’s doing. Or that running up mountains is so routine for her that specialist underwear is not required!

At the registration desk, look blank when you are asked for your ‘certificat médical‘.

Next, make sure you are wearing the same brand of trail shoe as the locals to create a little excitement. You’ll be glad you warmed up with some yoga stretches when your foot is hoisted into the air for closer inspection.

The route starts with a ceremonial tour of the village, to the cheers of the cheese festival crowd. It’s just like the Tour de France: no-one is really racing yet.

The course turns out of the village onto a steep mountain path that zigzags upwards, shaded by trees. Don’t be perturbed when you realise it is actually too steep to run. No-one said this was a running race! And I have it on good authority from an international fell runner that above a certain gradient it is more efficient to walk than run (see archived Keswick Race Report from September 2014!)

Do your best to keep up with the people you recognise in front – the older, foot-hoisting man, his daughter with the lacy bra, and the other friendly man who looks like a famous French actor you can’t remember the name of. Try to disregard the note of surprise in their voices as they comment on how well you are doing and ask you your name.

Even when you feel like you have been, er, walking up this mountain For Ever, don’t look at your Garmin or you’ll realise you’ve travelled less than half a mile. Especially don’t look at your pace or you might see a number you don’t even recognise. And let’s hope ‘auto pause’ is turned off.

The path eventually eases into the kind of gradient that you would normally consider running on. Your new friends helpfully comment on your heavy breathing, accompanied by gesticulations and demonstrations, possibly saying something about altitude? – as you try to break into a run despite the extraordinary fatigue in your legs.

When the path turns downwards, you might feel relieved, until you realise that the path is so steep and uneven that you don’t want to run now either, as you’re likely to trip and break if you do. However, your new friends won’t allow you to walk: foot-hoisting man takes hold of your arm and shoulder and runs with you at a frightening pace to show you how it’s done. He lets go but the group continue to call out ‘Allez, allez!’ and ‘Continuez!’ every few minutes.

Declining a drink from the nice people standing outside their house may be something you come to regret when you round a corner and the path turns steeply upward once again. When you are forced to walk once more, you may feel your spirit breaking, but your friends are not letting you give up – you are practically family now and they won’t leave you behind.

At last you are running, yes running, along a path on the exposed mountainside, now with the hot sun to contend with, and you are required to show appreciation of the beautiful mountain scenery below and all around you.

Suddenly you’re on a road – and you can move! The group descends at some crazy speed steeply down towards the village. As you approach the finish your friends take hold of your hands so you’re running in a line of four. The final challenge is trying not to trip over an excited dog who has decided he wants to join this friendly pack and is running in front!

You may not spot the finish line until a man standing in front of you is holding his hands up to stop you ploughing into the cheese festival crowd. You finally look at your Garmin – 39 minutes! Thank your new best pyrenean friends, without whom you would probably still be on the mountain, and head for the village water station – but watch out for foot hoisting man who appears to be taking a bath in it.

There are prizes for almost everyone who took part. The ham sandwich eater is the winner and is awarded the largest cheese in the festival. You don’t qualify for a place or a time without your medical certificate, but when your friends realise you’ve been overlooked as joint first lady (who knew?!) they’ll insist there are prizes for Les Anglais: a bottle of wine, several tins of paté, and a vest from the local bear park.

So that’s how to make friends with the pyreneans. Next, recover with plenty of cheese and red wine ready for tomorrow’s 10 mile hike!
Emily Holden and Sam Pretlove completed the Course à la montagne d’Etsaut with no official times recorded, but may be back next year with their medical certificates! 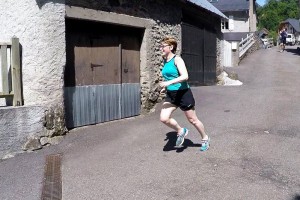 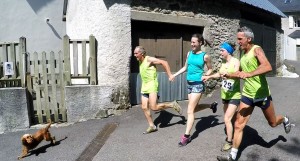