Lesley Pymm reports:  It was a return to Tittesworth Reservoir to the lovely Cracker – a race I had not run for some time as I had been away for the last few years.  I was a little anxious as I had not run the distance since Wasley – and was hobbling at the end of that as I had a problem with arthritis in my toe.  That is still there, but had gone down so I was giving this a go.  It was a lovely day, but the day after the freezing rain.

When I collected my number, I was told that Mountain Rescue would not agree to us running on the Roaches as it was still covered in ice.  Apparently they had a dreadful afternoon on the previous day as many walkers had to be helped off the ice that had taken them by surprise; they had checked it out and it was still icy.  Rather than 8 miles over the Roaches – we were running 4.5 miles around the reservoir.  At least I could stop worrying as I knew I could run that – it was not totally flat, but certainly nothing compared to what I had expected.

I enjoyed the run and this was added to by the fact that I was, as usual there, very ‘under-dressed’.  Most of the runners come in fancy dress and they go to so much trouble.  Before the start, one of the runners – complete with kilt – was playing the bagpipes.  I don’t think he ran with them.

It was a good run and I got the category prize.  There are also 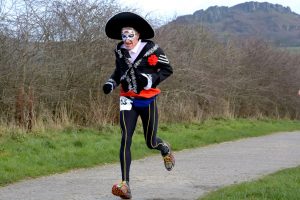 prizes for the best costumes and a team prize for dressing up.  Maybe BvH could get involved one year……

I hope to be there next year and to be able to run the whole thing.