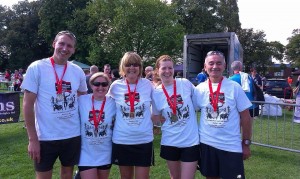 This was to be my wife’s third half marathon after doing the Birmingham and Stratford half last year, Sharon wanted to improve her times so decided to join BvH.

We set out at 7:30am picking up Cicci and Lesley at the club, Cicci bought some cakes which he was trying to get us to eat before the race! We decided it would be best to wait till after.

We parked up and had a short walk to the start where we met up with Stacey Marston and Mike Scotney. We had a bit of a warm up which mainly consisted of walking to and from the toilet queue!

The Carver event is pretty big as it holds a children’s run, a 10k, cycle race, half marathon and the full marathon!
Time was ticking and everyone started walking towards the start line, it was a 9:15 start with perfect weather conditions.

I wished Sharon,Cicci,Lesley and Stacey good look on the run and zig zagged my way through the crowds looking for Mike who was pretty close to the front, I never usually start this close but my thinking was try and keep Mike in sight.
Mike was using this as a warm up for Birmingham so he was looking for about 7:20 pace, I was hoping I could hang in and do the same as this would get me in around 1 hour 35 mins.

We started off weaving through the crowds and we were both quite surprised to see people walking so early on, maybe they were the marathoners.
The first 5k was bang on 22mins which I heard Mike say was on target, at about mile 6 there was a loop where you could see the front runner, he must have been about a mile in front, there was the winner already!

On the way back through the loop we saw Lesley and Stacey so gave them a big wave, just after this we went through a housing estate and part of an industrial estate…maybe not the most scenic race I’ve done but I was enjoying it and having a good chat which was making the miles go faster and easier. when we got to about mile 11 there was quite a big hill and for some reason our chatting when pretty quiet at this point….we got past the hill and pushed on for the finish, we saw the mile 12 marker which was very welcomed as we were both starting to feel pretty tired.
Mike was telling me to go for it so at this stage I was just focused on the finish so just went for it, it turned out to be the quickest mile!
Very pleased with the results, as this was a PB for me, I would definitely do the race again and would encourage anyone looking for a well organised friendly race to enter.
A medal, t-shirt and a millionaires shortbread cake what more could you want for your £17!

Also a PB for my wife Sharon for knocking 8 mins of her last half marathon since joining the club!
Well done to Sharon,Mike,Cicci, Lesley and Stacey, 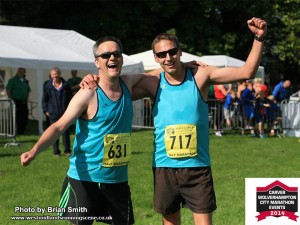