Stacey Marston reports: Ah, August, time for #BvHBingo and a rush of race reports to keep me busy in my role looking after our club communications. So why not add to my own workload (but tick off an all important box on my bingo card) with a quick race report from the Cannock Chase 10k?

The original plan for this weekend, and the visit from our twin club, Newbridge AC, was to take part in the Stourbridge Stumble; flights had been booked and arrangements made when we heard the news that the race had been cancelled. We looked for other races, ideally on Saturday evening but to no avail. Cannock Chase was the nearest race available on the Sunday and so it was that we found ourselves in convoy (and some of us slightly worse for wear after the night before in The Country Girl), heading from The Beeches in Bournville to the beautiful Chase for a hot and hilly 10km run. 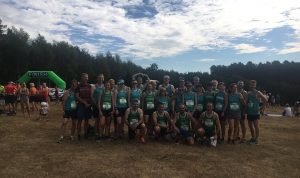 We made it to the race venue with plenty of time to compare size of hangover, make use of the facilities and get a couple of team photos before the start. The first mile started with a fairly steep descent and a reminder that whilst it had been very dry to date, trail shoes might have been more suitable on the looser gravel sections. Too late to do anything about that I focused on enjoying the downhill knowing what was to come on the uphills. Having run a (different but similar) 10k over this way I remembered a few challenging climbs. The temperature was pushing 27-28 degrees but in the shade of the trees it was quite pleasant and, although there were a lot of runners there weren’t too many places where it was too tight to pass others (or be passed as the case may be!) It was lovely to see Linda, Dan and Áine who had come along to support us all. 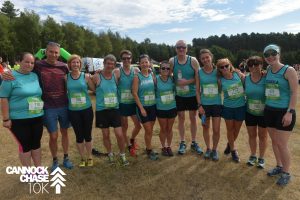 We crossed a stream at around 1.5km and then one of the longest (but not quite the steepest) of the climbs on the course up to the two mile point. Steve Doswell offered some words of encouragement as he came past and I wondered how many of my fellow BvHers and our Newbridge friends were behind me… I decided that I was probably as quick walking the steepest sections and that it would help to manage my effort for the rest of the race. Afterwards my Strava analysis had this down as a “Tough” effort, so I guess I need a bit of practice if I am going to push my heart rate up to “Massive” as Mat Pollard managed on the same course!

As well as the hills the surface kept the race really interesting and I enjoyed having something to focus on, the scenery was beautiful, the trail running through the woods in and out of the dappled sunshine. It was quite hot for running, but we must all be getting adapted to these temperatures by now and the occasional shade was well received. I was very glad of the water station just after the halfway point (I tipped most of my water on my head as well as drinking a fair bit of it). There was a lovely downhill section next so I tried to relax and caught everyone who had run past me on the climb, which was a pattern that continued for the rest of the race, with just a few exceptions. Although overall the second half is downhill, there are still some interesting climbs, a pretty section around a lake and then the steepest of the uphills at about 7/8km. 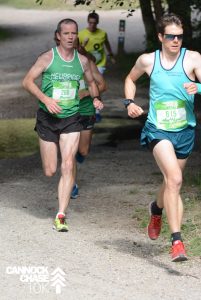 I saw Guy (who was out for a little run but not racing, having thought better of it just a week before his first marathon) and then Áine and Newbridge’s Paul Archbold not far from the finish. I felt I had a bit in my legs for the last few hundred (thankfully flat) metres and just managed to catch a runner before the line. I headed over to a collection of tealsters in the shade and to hear how well everyone had done with four trophies going to the Newbridge team; 2nd and 3rd place for Iosif and Mick in the men’s race; Paul was first male veteran and Emma was 3rd female. There was a brilliant turn out for Bournville too; with some great performances, including a 5th place for Mat and Monica was 3rd in her age category. One of the graduates of the beginners’ course, Kerry Oliver, also completed her first 10k on this difficult course supported and encouraged by the rest of Team Teal; after this one other 10ks will surely be a breeze! 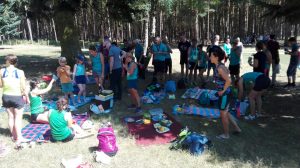 After the race we enjoyed a fantastic picnic in the shade with a bit of bubbly (and muscle rolling!) to celebrate an awesome weekend. Reflecting on the choice of race I think that it worked out pretty well for a Plan B – it was certainly a day to remember!