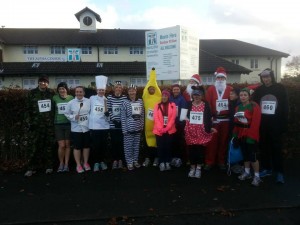 Freezing cold rain, high winds and cold temperatures could not stop some very determined BvH members turning up for the yacht Handicap this year. This members-only event had a great atmosphere and was a lot of fun to take part in.

The marshals were fantastic, standing in the freezing conditions to cheer everyone on. The great atmosphere was made even better by the awesome costumes worn by the runners during the race. There were escaped convicts, chefs, elves, santas, commandos, Disney characters, a monkey, a banana, a reindeer, a fairy and a few people even dressed up as runners! 😉 It all made for a really fun race, followed by some well deserved drinks and the chance to warm up in the bar after.

The Yacht handicap is not your typical race, as the winning team is decided by who came closest to their combined predicted times.