Andy Hoole Reports: I hadn’t really set myself any running goals this year, being preoccupied with other daft pastimes of appearing in a play and trying to finish my Masters. However, when I saw that a new half marathon race was taking place that started and finished at the home of my football team Wycombe Wanderers I knew that I had to sign up!

My last trip away to a race involved a short holiday in Reykjavik. This time I had to make do with a slightly less exotic overnight stay at a Travelodge in High Wycombe, which if nothing else meant that I was rested up to arrive early at a drizzly Adams Park to collect my number. Whilst queuing for the loos, I also randomly bumped into Martin Foster who was doing the 10k version of the event.

I didn’t have great expectations of a fast time going into the race, seeing it was multi-terrain and guaranteed to be very hilly (for those of you unfamiliar with lower division football grounds, Wycombe’s is located at the end of Hillbottom Road which gives a small clue). Stood on the start line in the unrelenting drizzle I also couldn’t fall back on my usual tactic of pacing myself against someone I recognised from a local race.

Such thoughts were put out of my mind as we started and, after the first mile along the road, we turned into West Wycombe Park for the first of the off-road sections. It was here that the ascent began. And kept going, pretty unrelentingly. The only short downhill part was on a particularly steep pitted track so progress was slow. At the 5k point, when the half marathon route split off I decided to revise my tactics and try to slow my pace reasoning that if I carried on at the same rate, I’d be pretty much spent by about mile 10. The group I was with pulled away, but with me hoping that they might be pushing too hard and allow me to catch them later.

My hunch proved correct as the course went back onto tarmac to cross over the M40 and by the time we hit a steep downhill section, which annoying lost us all the height we had gained, I had caught them back up. As we started to climb again I managed to drop them and focus on the next runner ahead. Although we were pretty much constantly going uphill, with occasional sections across grass to mix things up, I sensed that I could catch him.

By mile 8 when we passed back over the motorway, I could see him walking over the steepest hill section. Thinking that he was either being sensible and conserving energy or was struggling, I banked on the latter and managed to pass him. That left two more who I could see ahead and I resolved to see if they were also tiring and were catchable.

The course became a bit familiar and I realised that we were being sent on a reverse of the first 5k to finish – which meant another go along the uneven trail in a wood and one very steep incline. When we got to it, I decided to put my lesson from the Stourbridge Stagger and walk it to conserve some energy. Ahead the two runners were trying to run up it and I thought that anything saved could be enough to give me a boost. As we hit the top I was proved right as I gained on them, and by the time we cleared the trees and came out into the park for the final two miles I was away and had a nice clear run to the finish.

That said, the final part was a particularly hard slog. Not only had the rain started again, but I had the classic moment of passing the 12 mile marker only to check my watch and see that I’d run about half a mile more than that! The final mile back up to the ground was particularly sapping, with a slight uphill incline feeling significantly more. Support though was in abundance from all the 10k runners who had finished and I just tried to focus on one of the stands that I could see in the distance.

Thankfully, I soon reached the ground, and turned to finish behind one of the goals. I tried to give it a strong finish, but was pretty much done – and glad that the race wasn’t taking place at the old Loakes Park ground with its notorious 15% slope from one end to the other!

Having collected a goody bag, T-Shirt and medal I was nevertheless surprised and chuffed to find I’d come 10th. Not only that, but on the walk to the car I spied Wycombe Manager Gareth Ainsworth and cheekily asked him for a photo. He congratulated me on the time and said that he doubted any of the players would be as quick – which doesn’t exactly bode well for fitness levels in advance of the new season…

Overall, this was probably one of the toughest races I’ve ever done. Apparently the organisers are seeking to refresh it with this new course and it certainly has the potential to attract a good field seeking a real challenge. I’m not sure if I’ll be back next year – but at least I’ll know what to expect if I do… 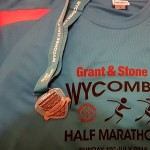 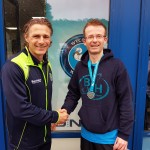