Lesley Pymm reports:  This was the first of the Shropshire Hills Summer Series and the first time I have run this actual event, although I have done a number of other events on the Wrekin.  I was a bit worried that there would be THAT dowhill section that I always have problems with!  I was pleased to discover that we did not go up the scree on this event, rather that we followed the main path up and down again.  It was only about 2.75 miles, but felt a lot harder!

There were a number of youngsters from a local school taking part.  Many were doing the shorter junior race, others were running in the main race with us and few were walking up – they set off ahead of us!  It was a glorious evening with the sun shining and only light winds.  After the usual briefing that I couldn’t hear, we were off!  It was a real hard slog going up, but really enjoyable.

As I reached the trig point at the top, some of the youngsters who had walked up were there and they were open mouthed with amazement at the view.  It was a great sight – it was probably the first time they had been up there, hopefully not the last.  I turned round and started the downhill.  It was fantastic.  Without the concern of the scree, I could just run and I did!  I passed three people on the way down and really enjoyed it.

What a fanstastic start to the summer season.  Brilliant run. 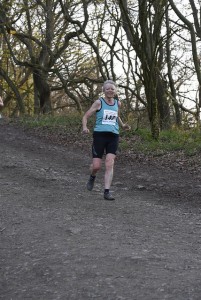