Lesley Pymm reports:  Well, someone has to come last!  The race started & finished at Ercall Wood Technology College, so unusually for a fell races there were toilets and the luxury of showers.  There was a junior race which started 5 minutes after us and was about 2.25 miles. We ran over a playing field and then slightly uphill through the car park (I heard someone say to some of the kids waiting for the start of their race, ‘How many of these will you overtake?’)  and onto the road – this was where the rest of the field started to get away from me!  It was very cold and I was struggling to get my breath on the uphill and off they all went.  It continued uphill on a quiet road for a short time going under the motorway and then we turned off and onto a footpath where it levelled out for a while. 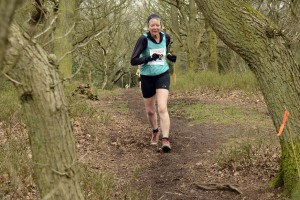 This was lovely.  Over a footbridge and then along a woody path.  It was climbing and I was gaining on the runner ahead.  I overtook her and carried on climbing.  I could hear breathing behind me – it was the first of the youngsters.  He had a really good lead on the others and hardly looked as if he was trying.  I was overtaken by two or three of the kids in the end.  At the top of Ercall Hill the youngsters turned off to go back down again and the adults went on. 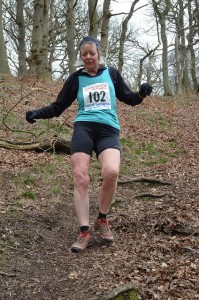 It was a very steep downhill, and I struggled.  My knees were really hurting and I couldn’t run properly.  The young woman I had overtaken passed me and took the hill really well.  I could see her and a man ahead and was trying to stay in touch with them.

There was another steep uphill and I could see that I was gaining.  At the top of this climb we turned and came out on the road near Forest Glen.  Then we started to climb again.  It was really steep and I was gaining.  At the top we turned right and then it continued to climb but not so steeply.  Up onto the top of the Wrekin.  The front runners were now on their way back down again.

At the top, it was around the trig and I started the downhill.  Not too bad on the ridge but then I turned onto the steep bit again.  I really struggled with the downhill and knew that there was now no chance of catching the runners ahead.  Eventually I got to the bottom and onto the track leading back to Forest Glen.  The steep downhills were now all behind me and I knew I would enjoy the rest of the run. 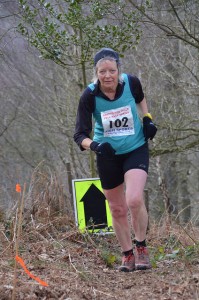 Another climb up.  Part way up I heard this disembodied voice telling me I was nearly at the top.  I couldn’t see the marshall for trees and his voice was bouncing off the hill and seemed to come from my left – although he was above me.  Very disorientating.  At the top I could see him – and the photographer.  A bit more of a climb and then some lovely runnable downhill.

Eventually I got back to the footbridge and then onto the road, downhill this time.  Into the school and finished.

I really enjoyed it.  It was just over 5 miles and took me about 82 minutes.  It was really exhilerating.  A quick shower and then to the presentations where I was amazed to find that I had won mycategory – obviously the only really old and decrepit one there!  I am looking forward to he summer fell races!