Lesley Pymm reports: Sitting in the cafe in Malvern before the run, drinking a cup of tea and watching the hail outside, I was confident that the downpour would pass and all would be well for the race. 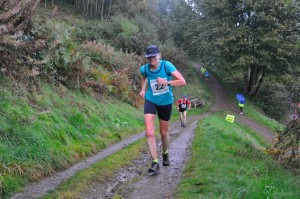 Standing in the car park and sorting out what to wear, the sun came out and I slapped a bit of sunscreen on. It was looking good. I took a T shirt to the start with me, fully expecting that Mike was going to have to carry that around as well as my jacket and water-bottle (the joys of being a runner’s bagman!)

It was during the warm up that things started to go a bit pear shaped. The sky clouded over and the heavens opened. The start area was surrounded with trees and there were little huddles of bedraggled runners under them. I tried to keep moving, I was going to get wet whatever, so I may as well keep warm. Eventually we were off.

Along a congested path where it was difficult to get going at my own pace and then climbing up into the woods. The trees at least kept the worst of the hail from us. It was a consistent climb until we got to the path leading to St Ann’s Well. There were crowds of supporters there and the volume of the shouting was incredible. Then onwards and upwards, a bit of a loop and then back down again and past St Ann’s Well for the second time – the noise was still as great this time around.

Then it was off onto the long loop which eventually saw us climbing up to the top of Worcester Beacon in the Malverns. On the top it was so cold. On previous years there have been families picnicking whilst we have been running. Not so this year. The rain beat down and it was like running up a river at times. I was so cold.

I can’t remember the last time I felt this cold whilst running. The ‘river’ I was running along was getting deeper and as I ran through these massive puddles I was splashing myself and adding to the generally wet conditions. Eventually I saw a marshal by the side of the woods, indicating that I should head downhill. Oh, what a relief – it felt instantly degrees warmer as I came off the top.

As I ran along I could hear shouting. Was I hallucinating? No, it was the crowd at the Well again. I was nearly home. Passing the spectators a bit more gingerly than usual as it was so wet and slippery, I ran on along the track and then was directed downhill through the woods. The path that I had come up an hour or so earlier was now thick mud. At the bottom it was a left turn and then straight along the path to the finish.

I was so pleased to get some dry and warm clothes on and to find that there was hot chocolate and homemade cakes at the race HQ. This was a good race. I missed it last year as it clashed with something I was doing at the club, but my time this year was considerably faster that 2 years ago – which I was really chuffed about considering how wet it was and I had to watch my footing more than usual.