Mike Scotney reports: Coming into the Autumn season, this race is handily timed to gauge fitness after what can often be a sluggish July and August!

Personally I’ve been concentrating on doing some long, slow runs in advance of the Chester marathon next month so after having declined both beer and curry at a beer and curry night, the evening before (which was a challenge in itself!), I was looking forward to putting in a sustained effort to see whether speed could match the stamina! 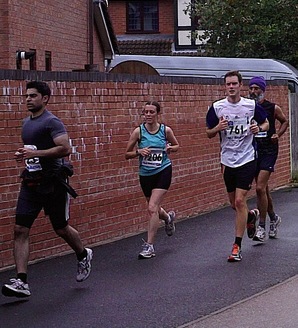 It was ideal running conditions, a little drizzly and not too warm, as Nathan, Andy and I discussed tactics whilst getting lost around Wolverhampton. Note to self – next year arrive earlier; we had trouble parking and then found we were still in the toilet area at 9.13 (for a 9.15 race start!). So towards the back of about 1000 runners we bobbed and weaved for the first few miles trying to burst out of the glorious urbanised areas of Wolverhampton.

It’s an odd race in a way; a mixture of half marathoners, marathoners, relay runners and cyclists (of whom I believe Gareth had a little altercation later in the race), but after about 4 miles the field settled down and we hit a section of off road and housing estate running, which actually helped in retaining concentration. I was aiming for 7 minute miling, which Andy and I hit on the nail for the 10km split, and feeling good with long runs under the belt, I kicked on in a hilly section following various ‘A’ roads back into Wolverhampton.

It’s an undulating and reasonably challenging course, with a bit of a cruel gradual ascent circumnavigating a large Park to finish, but a really good test of fitness. The support, both in having ample water stations and from the watching locals, was excellent; it feels very much like you are part of a well-organised event. Definitely one for the calendar again next year

I was very pleased with a resulting 1.31, and the OCD was even more pleased that it was achieved at an average of exactly 7.00 mins per mile! Congratulations to a good BVH turnout; Gareth came a fantastic 6th overall, Caroline achieved a fantastic PB and was 3rd female, Stuart did another sub 1.30, Andy knocked nearly 8 minutes off his PB (if memory serves correct), Maggie PB’d (and was 13th female overall), the list goes on …..

Also, congratulations to Ed Hartley and Terry Doherty who ran the full marathon. Ed was 1st in his age category with an amazing 3.11!

Half Marathon (PDF of results):