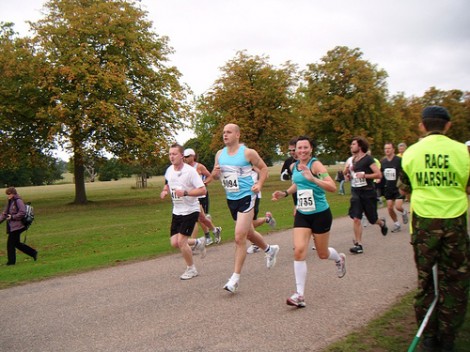 Sarah Rock reports from Windsor: As I stood on the start line at Windsor, I was full of nerves as I realised that it was a whole year since I had raced a half marathon (in Melbourne), having been plagued by injury to my IT Band, and I had no idea how I might get on.

The race starts in front of Windsor Castle with a mile-long gradual uphill stretch up the ‘Long Walk’ to the Copper Horse statue and then there are two laps of Windsor Great Park. I had been advised by some locals that the course had been changed in recent years and was not too hilly – there were no seriously hard hills but they were so frequent, that every bit of flat was thoroughly enjoyable!

About a mile in, I chatted to another chap, who like me, lived in Brum, was recovering from injury and hoping to scrape 1hr 40 – our spurring each other on meant that we put in a few fast miles.

It turns out that they were a bit too fast! as at 8 miles, I was flagging. With the help of a gel, I tried to keep pushing through the fierce wind the last few miles of exposed hills. As I hit 12 miles and rounded the corner at the Copper Horse to head down the Long Walk to the castle, I knew a PB was in sight and so pushed as hard as I could.

Anyone who has ever run this stretch will know it is deceptively long mile and despite the brilliant crowd support all the way along the last mile, I came in just 11 seconds after my PB. My injury did not flare up and so I was really chuffed.

Set in the shadow of Windsor Castle, this is one of the best scenic routes I have run in the UK and the crowd support was fantastic – definitely a recommended race (if you like hills!)
Chip Time: 1:36:31