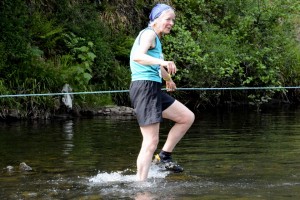 Lesley Pymm reports:  After the disaster of the Trout Run last year when I had knee problems and couldn’t do downhills, I was looking forward to this years event.  This started at a different farm to last year.  The run is connected the villiage fair and this alternates between three different farms, so the run moves as well.  For some reason the start wasn’t as advertised and, apparently, this made it a bit easier.

The run started on the fair field at Tolls Farm, Wincle near Macclesfield, and we ran along a track past the trout farm and then did a loop that took us past the car parking field and then through the farm where we had started last year.  We went through the woods and had to hang around in a queue for what seemed like ages to get over a stile.  Over that and we descended to the river Dane.  It was not very deep but pretty slippery

Up the boggy field, onto the track and alongside the river on an undulating stony track to Gradbach.  Then there is the climb through, then out of, the woods and on to Hanging Stone.  I had hoped that it would be cooler on the top, but no such luck 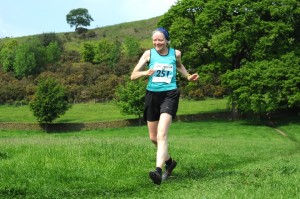 From there, it’s downhill across fields and then down through the wood to Danebridge, for another river crossing, this time on a bridge, and back to a field close to where we started from. This was yards from the river – so most of us went and paddled afterwards.  Brilliant run (something like 5.5 miles), great marshals, Bryan Dale was there taking the photos, tea/beer tents afterwards.  What a lovely way to spend a summers afternoon!