Lesley Pymm reports: Wednesday evening was really close as we warmed up for the West Bromwich 5k held at Aston University Sports Centre on the A34 at Great Barr. 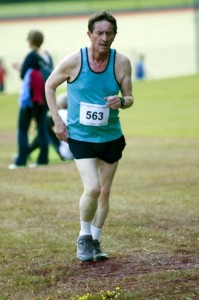 I did a slow amble round the new course to check it out and felt really warm! The course was similar to the XC held there in winter, but minus the ‘twiddly bits’ in the middle of the field. It was basically 2.5 times around the sports field and car park. This meant that it was predominantly downhill (although it didn’t really feel like that) with uphills at 2 and 4k. By the time we started, it had cooled down a little, but was still hard work. I really enjoyed the event and overtook a few people on the way round.

The BvH representation was limited to Barrie Roberts and myself, with Mike and Katie supporting. Barrie, who does not usually do hills in summer, had been in training via the Tour of Bournville and did really well. He was beaten in the M60 category by a lad who had just turned 60. Looking at age grading the winner (22.54) was 70.0% and Barrie (24.31) was 70.4%, so had that been in operation he would have won it. 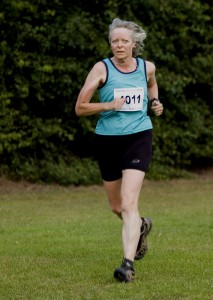 My time and age grading were 28.48 and 64.6%. I went away with a bottle of wine for winning my category. I’d like to say that I fought of steep competition, but it was a case of having to be in it to win it as I was the only W55. I was beaten by someone who will be in that category next year, and who has always beaten me in the past – there’s some incentive to keep trying then!

A ‘real ale’ bar completed the evening although I just downed two pints of blackcurrant squash, I really was dehydrated. Anyway, it was a reward for Mike for supporting us. Thanks to Mike for the photos.