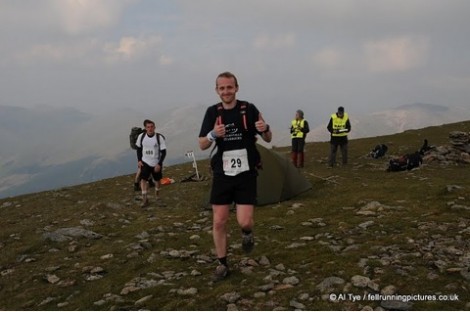 Report by Nathan Jones: At just over 22 miles and 9000ft of ascent, taking in the summits of all five Welsh mountains over 1000m high, this was a race I’d been looking forward to with equal parts fear and excitement.

By some miracle it wasn’t raining in Llanberis as my brother and I dropped the car off at 7:30am to catch the coach laid on to take the runners to the starting point at Abergyngregyn, although the thick mist looked ominous and threatened to make navigation very tricky.

By the time the race started the mist was still very thick, and it remained so for the first couple of miles as we climbed gradually up through woodland towards Aber Falls. After crossing the river above the waterfall, we started on the long slog up between the Bera mountains towards the main ridge of the Carneddau range, and soon rose above the mist and into glorious sunshine. We soon reached the first checkpoint on the summit of Yr Aryg, and then set off on a less boggy and more runnable path towards the rocky summit of the first 1000m peak, Carnedd Llewelyn.

At this point we were still relatively fresh, so we stopped only for a quick Snickers bar each and then headed off to the next peak, Carnedd Dafydd. Up until this point, the vast majority of the route had been uphill, so it was a relief to open up a little on the descent from Carnedd Dafydd towards the first control point at the Ogwen Valley mountain rescue centre. Having reached this point in 3 hours, an hour and a quarter inside the cut off time, we felt we were making good progress and could afford to stop for a while to eat and to refill our water bottles. In hindsight this proved to be a mistake, as when we started up again we both struggled with stiffness in our legs, which was not ideal given that the steepest part of the run was coming up.

After a brief discussion we decided to crack on and pull out at the next control point if necessary, and headed up via Bochlwyd Lake towards the steep ridge of Y Gribyn. We trampled up an interminable path at a snail’s pace until we reached a scrambling section of the course that had been marked out towards Glyder Fawr, the third 1000m peak. This section required genuine scrambling and was quite hairy in parts, but fortunately I was too shattered at this point to bother looking back down the way I’d just climbed up, which was probably for the best. We checked in at the control point at the summit, and then hobbled down the other side of the mountain towards Llanberis Pass.

By the time we reached the bottom of Glyder Fawr we were both suffering quite badly – my brother with a twisted ankle, me with cramp – and had long given up any hope of finishing in a decent time. However, we still had over two hours to go until the eight-hour cutoff point for finishing the race, so we decided to push on up to the summit of Carnedd Ugain and then across the very short distance along the ridge to the finish line on the summit of Snowdon.

The next couple of hours was mainly spent plodding for five minutes, stopping and cursing for a bit, and then plodding along for another five minutes. After reaching a turn in the path and seeing the summit ridge appear to be absolutely miles away, we were both pretty despondent until a runner coming back from the summit passed where we were sitting to rest and told us that we were easily within 45 minutes of finishing, which gave us a timely boost and the encouragement needed to stop moping and get cracking towards the summit.

Happily, he was right, and we reached the summit of Carnedd Ugain around twenty minutes later, and from there made the brief climb to arrive at the top of Snowdon some ten minutes afterwards, to finish in a time of 7 hours 33 minutes.

Our reward? A slate memento and a five mile walk back down Snowdon to the car in Llanberis. Brilliant….