Laura Gale reports: I know this is a popular race, and I imagine many of you have run this before as this year was it’s 30th anniversary. 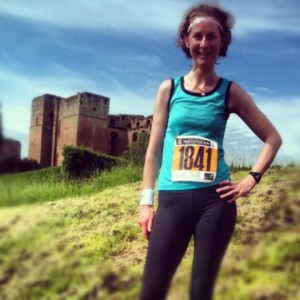 A beautiful morning for a 10K race! After extensive emails from the race organisers about how bad the traffic was going to be, and how bad the weather might be, it turned into a well organised, traffic-free, sunny race. Plenty of runners milling about in the beautiful grounds of Warwick Castle, also plenty of peacocks milling around too. A very regal and classy start to the event.

I was impressed with the kit drop-off service, where you sling your labelled bag in the back of a transit van ready to collect at the finish. After a fun warm-up session (which most other club runners were far too cool to join in with) we were funneled down a rocky steep sided, narrow lane to the inflatable start arch. The race is all on tarmac roads which are fully closed for the duration of the run.

I would say this is a pretty flat course, just a few gentle slopes which were over before you knew it. Three water stations along the route were manned by enthusiastic children. These were very much needed as it was so hot! I have been trying to perfect my drinking-while-running technique, as previous efforts have involved me throwing squash in my eye, and also on the runner behind me…. think I did okay today. There were also plenty of water pistols, garden hoses and bowls of jelly babies too.

Coming up towards Kenilworth Castle for the finish was exciting and there was plenty of support – i dug deep and nipped past a few runners who had been in my sights for most of the race. A medal, a t-shirt (non-technical) and a drink were in the goody bag. The finish was as well organised as the start as I found my kit bag quickly and boarded a free (rather sweaty) bus that took us back to the start. Finished in 50.21

It felt rather special running between the castles, so I would definitely recommend this run, I only wish I’d ‘done an Oralndo’ and worn my sunglasses, as it really was super sunny.

I see that 2 other BvHers ran too – Katie Hughes and Kevin Oakes – well done guys!