Truro Half Marathon (aka Mountaineering in Cornwall)

If you’re after a challenging, hilly half marathon in a countryside setting and with (quite possibly) the best post-race goody bag yet, then the Truro Half Marathon is definitely for you.

After a summer of extensive training (doing no running and eating too much) I was perfectly fit and ready for this tough race (errm…). Back in Cornwall and visiting the parents, I was enthusiastically encouraged to enter the race by the running mad mother, and being a good, obedient daughter, I couldn’t really say no.

The race started from Lemon Quay, a ‘piazza’ style open area in the centre of town at 9:30am. Long before the race started, there was a buzzing, friendly atmosphere on the quay as various Cornish runners greeted each other (everyone really does seem to know everyone else down here). The race HQ tent was running smoothly, and I was able to sign up on the day, collect my number and stylish technical t-shirt (red, not a colour I’ve had before) in plenty of time before the race start. The best part, however, was spotting the piles of local beer being set up next to the finish. 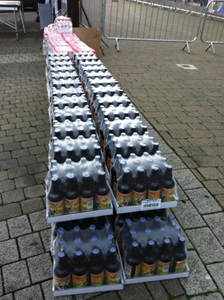 The race started promptly and took the 460+ runners on a brief jaunt around the town before heading out along the river and on to the first of the ‘multi-terrain’ sections along the old railway line. This is a gentle uphill start in preparation for the mega-hills that followed swiftly afterwards. The route this year has been changed to make it more traffic friendly (no road crossings), but it now includes possibly the steepest roads I’ve ever run up. The first 5 miles were a continual uphill grind along country lanes. I was quickly reduced to walking up the near vertical first hill, and most of the subsequent hills. I’m not even sure whether I’d have really managed to run them when I’ve been fitter and done more training! Eventually we reached the top and turned left along more quiet lanes before a short detour along the edge of a field (to avoid a narrow part of the road) where some excellent race organiser had even spray painted the ankle snatching tree roots a nice shade of orange so we didn’t trip over them. After this we briefly re-joined the road before taking a sharp left and plummeting down a vertical footpath. This was then immediately followed by the equally steep climb out of the valley on the second half of the path and back on to the lanes again. We continued along ever more ‘rural’ lanes, including another steep drop down and climb up on a track that is clearly marked as a road on OS maps and google, yet would be impossible to drive down in anything other than a 4×4. Finally we reached familiar territory and another short climb up before the long hill down into Truro. The finish is great: a short blast along the edge of the river, then under the subway and up on to Lemon Quay to the sound of a roaring crowd of supporters. A quick stagger over the finish line and I was greeted by the aforementioned excellent goody bag containing: a bottle of local Skinner’s beer, a bottle of water, a flapjack (nut-free, hooray), a banana and a random selection of Nikwax freebies courtesy of Cotswold Outdoors. A short stumble into the race HQ tent and we were able to grab a free hot pasty (meat or vegetarian) and buy slices of delicious homemade cakes for 50p.

Due to the lack of training and the difficulty of the terrain I achieved a new record slowest half marathon, but it was definitely worth the pain for the sense of achievement at the end. Mum well and truly beat me, and managed an excellent sub-2 hour time. I plodded along in 2:05:53, which is better than I expected at the half way mark! All in all a great day, and well rounded off with a sampling of some more local beer in the Old Ale House pub afterwards (the Truro Running Club post-race party).