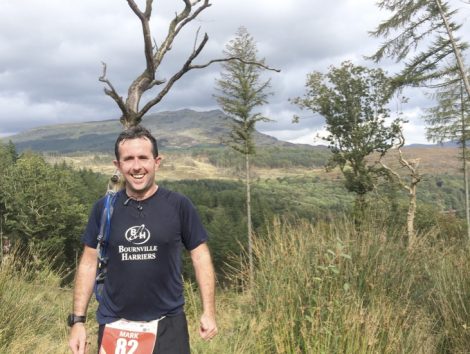 Mark Doudican Reports: This is my 3rd trip to Snowdonia this year for tough but scenic trail halves. The previous being Trail Wales (Winter & Summer) in nearby Coed-y-Brenin. But this was my 1st time at this event.

The race HQ was at the station for the Blaenau Ffestiniog steam railway. (Note the double F in the name, hence the unusual spelling of Trailffest).

I’d decided to travel up the night before in order to rest the legs as much as possible. Checking-in was easily done and the race number was accompanied with a technical t-shirt, the usual sponsors leaflets and a bottle Ale from the local brewery.

One race day we were to meet the dedicated steam train at 10:30. This train would take the runners and spectators up into the mountains to the start, then follow the race back stopping at numerous points allowing the spectators to hang out of the windows and give you a cheer as you ran past. This was a good idea for travelling spectators who at most race only get to see the start then hang around waiting for the runners to loop back.

After a 50 min train ride we were dropped off at the head of Tanygrisiau lake for the start line. Because of the logistics of the train needing to turn around, and the track to be clear for the return journey there was a 1 hour wait at the start line. The scenery here showed the landscape for the first 3rd of the course. We were right in the middle of slate mine territory. Very picturesque on a sunny day, but not the place you would want to be in a rainstorm.

I spoke to Lesley Pymm and fellow runners that I knew from other Birmingham running club. there was a real sense of excitement, and everybody want to get out there.

The start of the race was counted down from 10, and commenced on a blow of the whistle from the steam train.

The terrain of the course seemed to be in 3 distinct parts. The first 3 miles was rugged slate mines. The trail was a track which was mostly old slate rocks. Not for the last time I was grateful of the dry sunny day, imagining a quite tricky course in the wet.

Here was when we learned the nature of the course. From an outsiders point of view this race starts at an elevation of 710ft and finishes at sea level. So you would assume its mostly downhill.

Some of the downhill’s were steps cut into the mountains that were trickier to tackle that the uphill’s.

After about 3-4 miles we entered the forest floor. For me this was the best part of the course, I love running on a single track course through trees.   Although at some points if was more of a 0.5 track course, and you really had to watch your footing to avoid any injury.

At 5.5 miles we crested a hill to be presented with view out to the valley at Llanfrothen. This was purely stunning. I must admit that I did stop running at this point to take a photo, which turned into a bit of a group photo session with other runners who were also taking in the view.

The views from the mountain tops were a great distraction from the running and is the main reason why I predominately do trail runs.

The up and down terrain continued to around 10 miles when we entered more of a farmland area.

At this point I started to pass more and more racers who were walking. Initially I thought this was just the fatigue, but the more you spoke to them as you past the more you hear the same stories. ‘Achilles gone’, ‘went over on my ankle’, ‘pulled my calf’. This was a sign of how careful you had to be with your foot placing. Again I was really thankful that I was not running on a wet course.

The very last stretch is along the side of the railway track on the sea wall. There was a warning about this during the race briefing. ‘it’s straight and flat, and you can see the finish line, but be prepared for a mile of being pushed sideways by the wind’. Yep he was right. Wind from the sea all the way home.

I crossed over the finish line and was given a race branded water bottle as the finishers memento (Personally I think this is more useful than a medal).

At time of writing, the official results are not out:

If you’re like me, who doesn’t care about times, and is more into enjoying the scenery and enjoys running in the countryside, then this is highly recommended. 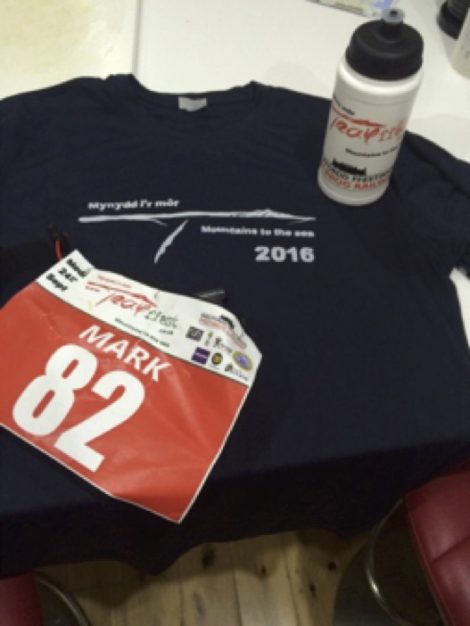