THE FOLLOWING REPORT SLIPPED THROUGH THE CRACKS IN SEPTEMBER, BUT IS WELL WORTH A READ. THANKS TO LAURA GALE FOR WRITING IT:

Another Welsh race to report!

This time a trickle of teal headed up to Snowdonia to take on Trailffest. It promised a lot as their website claims that it is one of the most scenic half marathons with dramatic changes in scenery. Áine Garvey and I drove up from Brum super early on the day of the race, while Helen Lawrence more sensibly stayed over in Porthmadog the night before. Registration was at the terminus of the Ffestiniog railway station. There is a decent cafe/pub here and plenty of other facilities, including Cob Records – “Wales’ premiere record store”. The view from here certainly was dramatic if a little daunting. You had the sea on one side of the platform, and then a wide open river flood plain that framed the dark misty ominous mountains in the distance.

The race start was up in those mountains at around 710 feet elevation, with the finish back down by the sea. The seasoned runner / keen geographer in me had figured out that this was not just going to be a down hill run though. After studying the course map I saw as many uphills as downhills… Your entry fee included a trip up to the start line on the wonderful narrow gauge railway. The seats and tables in the carriages were clearly designed many years ago for finer framed gentlefolk, so it was quite amusing being wedged into them with 160 other lycra clad runners all nosily chatting about running – obviously! The train snaked slowly up the mountain revealing lush steep sided valleys and ancient woodland. Amid the talk about energy bars, electrolytes and who had actually already run the course (!!!) we started to notice a much more bleak landscape shaped by mans impact: of rock, slate, quarries and reservoirs.

The length of the railway is 13 miles long, but our stop was the last-but-one before Blaenau, at a lake called Tanygrisau. The air was still and the lake’s surface like glass. It was not quiet though! There was music from a pretty powerful PA system, a line of portable loos, and mountain rescue…. Despite there being only 160 runners, we chatted to a couple from Franklin Rd in Bournville, some guys from Harborne, and one of Mark Doudican’s work colleagues. We left our bags in one carriage on the train – they were being taken back down to the finish for us. Rushing back onto the train for a forgotten sweatband meant that Áine nearly missed the start – she had to jump off the train whilst it was moving! After race instructions in Welsh, a long toot from our train started the race.

The run was indeed scenic and dramatic. We ran through slate quarries, alongside the reservoirs, through open countryside, onto wooded slopes (with evil steep steps), through felled fir tree plantations, on bouncy grass tracks and treacherous slate paths. The course was very well marshaled and sign posted, with enough strategically placed and well stocked aid stations for the distance. The route roughly followed the railway line, and as you met up with passing trains you got cheers and waves from the passengers and a toot from the driver (race supporters got a discount on their train tickets). This was a *very* challenging run and as I read the names of other clubs on runners vests I felt a little out of my depth: Oswestry Olympians, Eryri Harriers, Cerist Triathlon… but glimpses of the sea kept you going. The final 2K was on tarmac. I was really looking forward to a bit of a familiar surface at the end, and thought I could burn off a few of the gaggle i’d been running with for the last few miles. I couldn’t. By this point my legs were so tired that I just had nothing left. The support as you ran along the length of the platform to the finish was just the lift I needed to replace a grimace with a smile.

Both Áine and Helen won spot prizes at the end. Helen won a t-shirt and some fancy body lotion, and Áine won mountain bike vouchers!

As tough as it was, nothing could take away the stunning views and camaraderie along the route. All 3 Harriers loved it! Definitely one for the diary next year. Anyone want to join us? (If you drive there I definitely recommend the A470 between Dolgellau and Porthmadog – a spectacular bit of road) 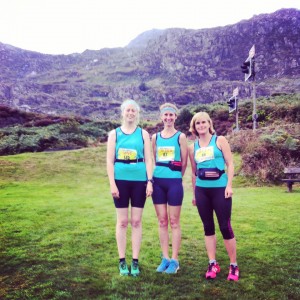