It’s been a while since I’ve wrote a race report and seeing as this is the biggest endurance race I’ve ever done I thought it was worth one.

The Ironman journey started a year ago ….ok ok it’s not the official Ironman, as John put it it’s like the Ironman but £100 cheaper.

So, the journey started a year ago when we signed up for Half Outlaw Triathlon in Holkham, John McKeon, Richard Rollins and myself trained hard and we all completed the distance in under 6 hours this of course led to conversations of “I wonder what the full would be like” the full consists of a 2.4mile swim followed by a 112 mile cycle and then to top it off you run a marathon…..this went on for a few weeks until we decided what the hell…let’s give it a go!

I must admit as soon as I registered I felt a feeling of uncertainty, I knew it was going to be hard but didn’t realise just how hard it was.

My version of a so called Ironman training plan looked a little like this:

So that’s the training I did and many of you will know it took a lot out of me with my constant moaningJ but saying that it did go very well, the cycle rides were all done on lovely sunny mornings, the swimming was also done on sunny mornings or sunny evenings and the running, well as you all know we have had brilliant weather for the last couple of months, scorchio!

Our training cycle rides took us out around some lovely parts of the country which included the Cotsolds, The Broadway Tower/Warwick and we cycled through Stratford-upon-Avon numerous times.

We arrive nice and early on the Saturday, plenty of time to rack our bikes and even get a quick swim practise in, so this is where the weather conditions had changed somewhat…the weather man has now forecast up to 40mph winds and heavy rain…….hmmm not what we have trained in, geesh my bike has never got wet before!

Ok, nothing we can do about it so again stop moaning and crack on. On Sunday morning the alarm goes off at 3:30! Eating 3 weetabix at 4am is quite hard – wish I had gone for the porridge now.

I met John and Rich outside the hotel at 4:30am and we set off to the National Watersports Centre……of course it starts raining, it had to because we haven’t had any for the last two months and now we are racing the heavens open up – typical!

Our three Bags loaded up in transition and wetsuits on, John left his goggles in the car and with only 15mins spare he decided to run back and get them, we said our good lucks and he was off…we had lost Rich at this point so I made my way to the lake start..Amongst about 1000 people all dressed in rubber there was no way I’d spot Rich so hat and goggles on and in the water I went.

After a few minutes the gun went off…..THIS WAS CHAOS, EVERY MAN (WOMAN) FOR THEMSELVES! if you are not a strong swimmer then I would suggest waiting for the masses to swim off because you would get kicked and bashed while basically trying to keep your head out of the water, no actually just trying to stay alive!!..it was a free for all…keep swimming/kicking and try not to lose your goggles…get to the first buoy, trouble was at the first turn everyone wanted to take the shortest distance which meant there was just a huge pile up….there was no use in screaming..Who can hear you when your heads under the water?

Swim was done …phew! I made it out alive so I race into transition, a quick change into my cycling gear, load up my pockets with the huge amount of food I’ve got, Helmet on and run out to collect my bike, I had a quick glance where Richard’s and John’s bike were and noticed they had gone so I knew they were on the bike course already.

This was interesting……rain and wind, I was tempted to stop and put my small rain jacket on but didn’t. I’ve only got to ride for 7 hours I can wait J

The cycle ride was tough, the wind just made the cycling even harder than usual, something we haven’t had to deal with on our training rides…my focus was on getting to the 75mile cut off area by 13:30, turns out I was there over an hour earlier so the pressure was off.

It was great to see Sharon and my mom and dad on the side of the road with the Bournville flag….ringing the cowbells, cheering me-everyone on…I stopped and had a chat with them then carried on…I did say to them carry on back to the finish to keep warm but they insisted on waiting till I completed the next loop which would of been another 2 hours!

As soon as I got back into transition they take the bike off you once you have prised yourself off the seat, after all I was in the saddle for 7 hours…you then run/hobble/walk or crawl into the tent to get changed into your running gear…it’s then it hits you that you are now about to run a MARATHON!

So I had a gel, trainers on, BvH vest on and sit down for a few to get my head together ….they really want me to run a marathon now??

I walk out the tent and have a look around…everyone cheering and the first person I spot is Barrie!! He was shouting, jumping up and down cheering me on…it was brilliant to see him, I stuck my thumbs up and shouted thank you! I felt quite emotional…I was on the last task of the day, all I have to do is run 26.2 miles and I will become an Ironman! (Outlaw) (We’ve been through this before)

My first few miles were Ok, probably averaging 8min miles or so..I thought if I can run the first half I don’t mind having to walk after that, the run is a lap of the lake and then a 8 mile out and back stretch of the river, you need to do that twice and then before you finish you go round the lake twice, half way down I saw Rich running towards me, I guess he was about 4 miles in front…we had a chat which went a bit like….this is tough isn’t it…yep, swim was tough, bike was windy…lets crack on, see you in a bit.

On my second lap I saw John, he was doing really well, I think he was on about mile 15 at that stage to my 8, a good hour or so in front…amazing bike ride in that wind.

Just before I completed half of the marathon I saw my champion support team and stopped for a little chat, told them I was feeling it now…this was getting tough and I said the second half would be a bit slower…I jogged on, not long after I saw Karen who gave me a much needed shout for support, telling me Rich was up ahead somewhere…I carried on..Wanting to walk but I knew the moment I started walking that would be the end of my run and I would end up walking the rest of it so I dug deep and kept on plodding, it wasn’t quick, more of a shuffle and some parts but I was running!

The feed stations were amazing they gave so much support and offered you Coca Cola/crisps/Jaffa cakes/oranges and gels..I was spoilt for choice although I couldn’t really stomach anything so I chose water and coke.

On my return journey from the out and back I just kept thinking all I need to do is run around the lake a couple of times and that’s it….the people running towards me I was trying to see how many wristbands they had on as you have to carry three to cross the finish line, there were lots with only one, I was lucky and had two…two wristbands =  a smug grin, keep plodding Si, not long left… 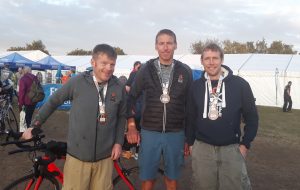 I got to the lake and I could see Rich walking on the other side with his wife Helen, it’s a huge lake but there was my aim…try and catch Rich up…keep running I managed to catch him up and we had a short conversation which got him running again…we only had a mile to go…we’ve got this…we will be Outlaws in about 10 minutes…that last mile was long…..very long! But then all of a sudden I was running down the red carpet with my arms in the air, boasting the biggest smile ever and I could hear the man with the microphone shout “Simon Newman – YOU ARE AN OUTLAW!

This was the hardest test of my endurance I have ever done. 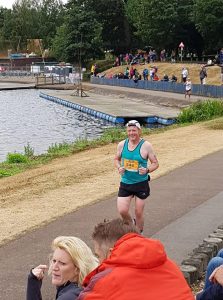 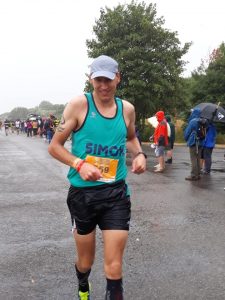 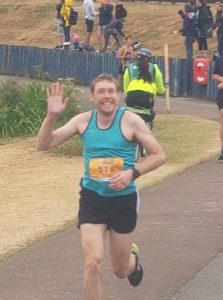