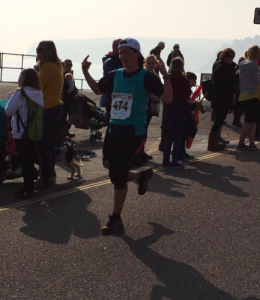 Suz West Reports: For several years I had heard a few people talk about this race ‘The Grizzly’, it always sounded challenging but fun. This race has grown in popularity and there is now a ballot system in place so I entered and got a place, so as part of my marathon plan the Grizzly was put into its 20 mile slot!

I arrived in Devon on the Saturday after noon and myself and Lesley Byrne stayed in a quaint little art cafe. Our friends Carol and Lesley provided great pasta and other carb loading food the night before along with some carb loading drink. There was Lesley, Jane and Jill doing the cub which is a 9ish mile shorter route than the Grizzly. So that left just me to run the full thing. Carol and Lesley run with the local running club and event holders Axe Valley. The club had been told to look out for teal combined with a back to front baseball cap! The start was literally across the road from where we stayed.
It was the most bizarre start to a race I had ever known. The town crier did some crying then got the runners to do it, this went on several times with bell ringing in between. I was starting to get the impression we are being sent to defend the shore line of England! Before we set off the grizzly prayer was read out: basically youve signed up for it sogrin and bear it! With that we were off.
This race doesn’t ease you in gently, oh no, within a few hundred meters you’re ushered left onto a pebbly beach. The sound of 1800 runners running along this was amazing. You then turn left back to the start and run over the timing mat which logs your first mile. My legs felt heavy already only another 19 miles to go. Following the road we now ran up what was at the time what I thought was a massive hill, down through a really scenic little village with spectators offering water jelly babies etc already. Then another hill – runners had started to walk as it was really steep. I decided to deploy a walk run tactic from this point. We arrived at a caravan park which we ran through and dropped down into the beach. This was a steep descent, one of many – and something I discovered I’m not good at. At the end of this downhill the beach greeted us, the runners in the cub peeled off left. It was an option and at 4 miles I was seriously wondering what I was doing. I knew if I gave up I would regret it. I turned right and decided to “Grin and Bear it”.
This led me through an estuary. There were drummers on the beach providing entertainment. Now out of the water started a cross country adventure, hills, mud and slopes awaited me. At mile 10 I was seriously flagging but we were in woods now and all of a sudden runners were saying look – next to me was a deer running in the wild! I was blown away by this and for some reason, probably exhaustion, started getting quite emotional. I carried on knowing that this race is renowned for its famous bog at mile 11. There I was wading through a bog when all of a sudden my left leg cramped up. Not an ideal location to suffer with cramp.The marshalls and other runs were great ensuring I was ok to go on. I had got this far no way was I stopping now. Grin and bear it that was the instructions! However, I hadn’t really quite realised I was just at the start of one bog  – there was another bog. Apparently this is known s the valley of the bogs in this race!
Once out of the bogs more muddy woodlands followed by more off road cross country. There were even more hills. My legs were tired now but finally a race were all those years of dog walking around the lickeys paid off. Walking up hill I appeared to be pretty good at. I over took quite a few with this ha ha I’m a dog walker attitude! This though always led to a steep down hill descent where I just got over taken. There was a bag piper and an English knight en route with the English knight shouting as we embarked up another hill to ‘Keep England Safe!’.
Eventually we were back down to the cut off point so back through the estuary. The drummers were still drumming, although at this point the noise of a drum in my ear was probably something I could do without. Across sandy pebbly beach now took us to what is known as the stairway to heaven. I was alarmed to see mountain rescue as marshalls – just how high were we going? Very high -climbing never ending steps carved into a cliff. The reward at the top? Well as the name suggests heaven – the best view ever of the jurassic coast. I assumed now this is it, we are at the end following the road into Seaton. I assumed wrong. A tight right turn brought us to another climb! Wondering if this race will ever end, I plodded on. Then we were on the promenade. I felt absolute exhausted, so when the others were on the side cheering me in I for one last time grinned and beared it. I pushed to the end and finished in 3.37!
I was given an awesome techincal T Shirt, two bananas and was hosed down by the fire brigade!! The most challenging, scenic and friendliest race I have ever done. Maybe worth a tattoo! Hope that if you read to this point you enjoyed grinning and bearing with this race report. 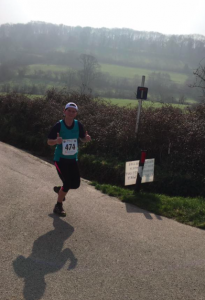 5 Replies to “The Grizzly”