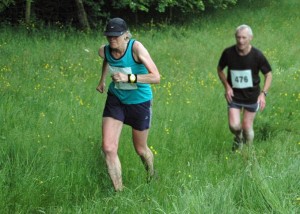 Lesley Pymm reports:  I really enjoyed the Darrens Dash, which starts from Longtown and takes us up the Darrens and onto Offa’s Dyke.  It is the third or fourth time I have run this event and it has been slightly different each time.  This time, the start was different and they had introduced a Cani X section as well.

The course is just under 6 miles long and includes a total of 1,500 ft ascent.  The new start meant that there was a ‘water feature’ early in the event in an attempt to string the field out a bit before we got to the stile which had caused a bottleneck last year.  There was still a bit of a queue there, but it was good to get my breath back before the climb that I knew was coming.

The Cani X started 10 minutes after the runners, and as I hit the open country on the side of the hills I could hear the dogs barking behind me.  I was a bit worried that they would want to overtake on the narrow paths, but it was OK.  The climb got steeper and, when I managed to look up from what was in front of me, the cloud was getting thicker and runners in front started to look like sinister figures looming there!!  My second mile actually took me around 20 minutes, so it shows how steep and difficult it was.

Eventually, after the false summit near the top, I reached the ridge that is the boundary between England and Wales.  There was undulating running along the Offa’s Dyke path which I really enjoyed.

The race description talks of’ ‘a swift descent’ to the Olchon Valley.  This is the bit of the run that I worry about as you have to clamber over the edge of the ridge and then over some rough  ground to get to a better path below.  Just before I got there, the first of the Cani X runners passed me and she started downhill first.  She was concerned that ‘her boy’ would drag her too quickly along there, so asked me to go first.  I, in turn, was concerned that I would slow them down and told her to let me know if she wanted to get past again.

Anyway, I got onto the better path where there was room to overtake and relaxed a bit.  It was good running, I just needed to be careful that I avoided the flat rocks as I was wearing studs and would have slipped if I landed on them.  After a while I could hear pounding behind me and was passed by another of the Cani X runners who was certainly going at some speed with his dog.  In the end, they were the only Cani X team to pass me.

There was another difficult bit where I had to change direction on a very steep slope.  The marshal there said to just keep going downhill until I got to the farm.  Although the mist had cleared a bit, I could not see the farm.  I just kept on going downhill.

I was really enjoying the downhill running after the  hard slog of the uphill.  I eventually got to the farm and ran through it.  Then I had to turn left and – horror of horrors – STEPS!!  I hate steps and my famous selective memory had wiped that out.  Anyway, I staggered up the steps and then up the short uphill run to the finish!

Starting and finishing at Longtown Community Primary School, 100% of the running is off-road on farmland, tracks & paths. This is a great event for families as there are loads of childrens’ races which I am told are really well organised (I wouldn’t know as they take place at the same time as the main run).  There are cakes for all at Longtown Community Primary School. Hill safety cover is provided by Longtown Mountain Rescue Team who benefit from some of the profits of the event.

I won my category, although I have to admit that it was a ‘be in it to win it’ situation as I was also the oldest woman there.  Still, I wasn’t last so that’s fine!