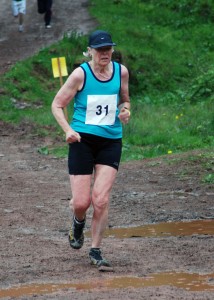 Lesley Pymm reports:  Another trip to Somerset to take part in this really lovely 10 miler.  It takes place at Combe Sydenham Country Park and is the most amazing course.  There is a steel band playing for the duration, and I could hear them for most of the way round.  The course is so intricate that runners never really get that far from the start/finish area, but still manage to run 10 miles without repeating anything. There is total climb of 2802 ft – fantastic.

The marshals are dressed as the Grim Reaper, and the race director is the …. Grim Director.  As we stood at the ‘Start of Hell’ he told us that we had all paid for a 10 mile race and, good news, because of forestry workings on the site we were to get a bit extra for our money (applause from the runners), he warned that it was a bit slippery out there and then off we went.

It was a pretty slow start but then we were off along a good path before coming to a halt to queue up to cross over a stream.  After the stream was a steady uphill for a while.  The course is fantastic, the reapers were out there cheering us on.  There were plenty of drink stations as it had been really warm on previous years – not so this time.

After the first drink station we had a loop in the forest and then eventully came out at the remains of Goodly Hamlet which had been wiped out by the Black Death in the 14th Century.  We carried on and ended up running alongside a river before going over (on a bridge this time) and running back along the other side.

We then had the final climbs.  The last climbs are really long.  Someone commented that they had watched me run all of the hill whilst others were walking – I have to; if I start walking I have problems getting going again.  Eventually I got to the top of Bird Hill.  This is usually a glorious sight with bluebells everywhere.  This year was different – it was still covered in primroses and gorse, with a few intrepid bluebells poking their way through – beautiful 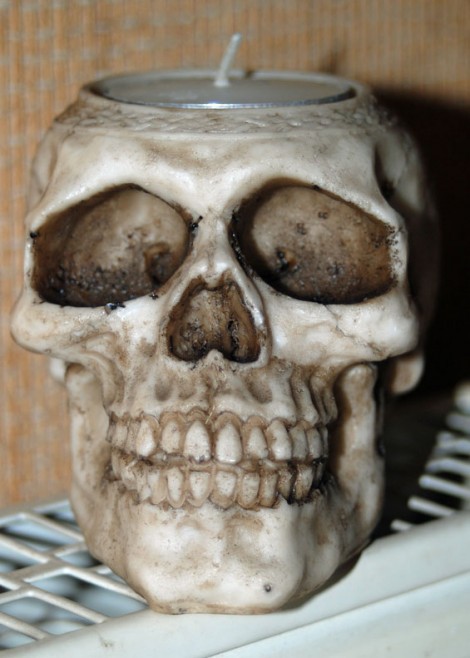 .  There is a copse at the top, and a sign saying ‘Oh Yeah’ – and after that it really is all downhill.  It is about a mile downhill, starting on grass and then going on to pretty good forestry tracks.

A good strong finish found me at the field where we could claim our mementos – this year it was a skull with a tea-light in it.  Very tasteful!  It had drizzled during the run, which had been refreshing, but then the rain came down.  It was a shame as they really do put on a lot of activities for families.