I discovered rock n roll marathon series last year at some point on the internet. I thought it looked like a fun thing to do and was slightly disappointed to find England didn’t hold any of these events. So when I discovered that Liverpool had been chosen by rock n roll as there first English race I immediately signed myself up. How could I resist my love of live music combined with my love of running! Plus all those race photos of me making rock signs and running about with back to front baseball caps. This was an early start the race started at 8am a bit of a shock to my body clock after an early morning teal road trip. The baggage area was in the echo arena after my initial confusion of not understanding what gear check meant (American term for baggage) It was well organised and quick drop off meant that there was time for a quick warm up. On entering the pens or Coral as rock n roll like to call it this is also an American term I was slightly concerned to find myself very near the start. Linda Howell was also in this pen sorry coral with me. There was a count down and we were off. I wanted a pb my aim sub 1.39 this race had changed from becoming a bit of fun and more of a dedication this one was for John. He had known I was training for this and was aiming for a pb. The first mile I don’t know how fast I was going as there was no mile marker! I could see Linda ahead though so had the idea to try and keep her in sight. Eventually mile 2 marker appeared I checked my watch and was on 14 mins too fast really but I didn’t have my soleus watch just a timer. I knew I should slow down slightly so I did. At this point I still had not seen any bands I was starting to feel a bit disappointed I wanted some music. It was billed as bands every mile. At around mile 3 my first sight of a band. There was a bit of an incline around this point and feeling I had gone off to fast used this to try and get my pace back on track. This worked as we ran through Liverpools parks I realised I was feeling pretty good but I wasn’t sure if I was on track due to lack of mile markers. However there gradually was more bands as I went around. The field had also spread out and at points I seemed to be running on my own. Eventually I went past 10k marker I figured out I was on track and could if I just kept to my pace break the sub 1.39. Leaving the very lovely parks of Liverpool I knew as I had looked at the course that the biggest incline was at mile 7. I overtook a few people on this hill feeling quite pleased with this achievement thinking of all those hill rep sessions I had ever done with John I carried on running. The next band I ran passed was playing the Rocky tune eye of the tiger this really helped. We then went to run through a wooded section it was quite dark in here and a little bit disorientating. I remembered that Katie was running with shades on and was wandering if she would actually be able to see anything at this point. She told me after she kept her shades on pretty impressive. The route led us to the promenade to start with this was lovely running by the sea what a nice view. However this lasted a couple of miles and I did start to get a bit bored plus there was no bands on this section. My mind was taken away from this when my reoccurring shoulder problem decided it was a good time to show up! I slowed down in hope I could run it off and after about half a mile it went. This nicely led me to the 12 mile mark and out of the never ending promenade. I thought that my slowing down had really messes up my time plus there was no marker for mile 11 so actually I didn’t know how I was doing. To my surprise I was more than I target. The race to the end took us back into the famous Albert Docks and I could hear music getting louder. I heard Maggie cheering me and as she was taking a photo the usual rock pose had to be done. I crossed the line in 1.37.39 knocking 1 min.48 seconds off my pb. Medals were handed out straight away very heavy and blingy with a touch of teal. Water was also available at the end. Once you were back in the echo arena the goody bag was banana, PowerAde bar, Lucozade, haribo ,jd bag and a technical t.shirt plus a token for a free beer! There were bands playing and this continued after myself and Katie had left Liverpool but the remaining Bvh got to see the Farm and other live bands. Unfortunately due to work I had to return home. Nicola Morris got a pb, Maria Wilkes and Lesley Proctor crossed the line together holding hands and continued dancing the rest of the day and night! Linda Howell and Katie Thomas also put in strong performances. Overall a good race not as many bands as expected, some signage issues but great goody bag and facilities. 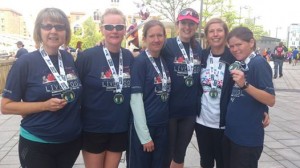 4 Replies to “Suz West reports on the Liverpool Rock & Roll Half.”