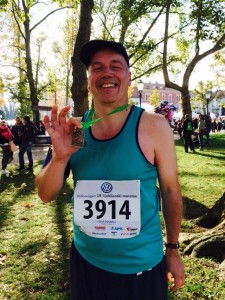 Love had a lot to do with this year’s half marathon in Ljubljana, Slovenia. The country’s slogan is ‘I feel sLOVEnia’. The name of the capital, Ljubljana has the Slovene word for love – Ljuben – in it. And over the 12 years since I first came here, I’ve grown to love this small, neat, pretty Alpine and forested country tucked up between Italy, Austria, Hungary and Croatia, with just two million inhabitants and a tiny strip of coastline on the Adriatic. It was therefore an easy decision to make my tenth visit to Slovenia this month and bring my love of running to the tidy streets of Ljubljana. I came with Liz and combined it with a week’s holiday.

For three days before the event, Ljubljana’s exhibition centre played host to a fair dedicated to running. This was also marathon HQ and I went there to collect my running number, complete with branded rucksack and a stylish long-sleeved technical top. With these on board, I felt the excitement of knowing I really was going to run the Ljubljana half marathon. My first foreign half was real at last. During a recce the night before the event, it felt  slightly surreal with the main street Slovenska Cesta closed to traffic but full of contractors in the darkness building grandstands and setting up signage on gantries:  Zone 1 (for finishers under 1h35m), Zone 2 (under 1h42m). The sign for my chosen start point – Zone 4 (under no illusions…) – wasn’t up yet. But the Finish arch was. I hoped to pass under that the next day in under two hours, but my main objective was simply to enjoy myself.  This was the 19th edition of the Ljubljana Marathon and this year around 18,000 runners had registered for the half (21km) and full (42km) events combined, so I expected things would be congested for those of us running at the blunt end of the pack. I wasn’t wrong.

Wind forward to the next morning. Sunday 26th October had finally come and the streets were absolutely buzzing with spectators, runners, drums, colour, clapping, cheering and tannoy announcements. Slovenia may be a mere postage stamp of a country (albeit a highly collectible one) in size but this felt like a big city run.

Finally, we were off. Zone 4 was several hundred metres back but as I approached the start line I felt as if I was coming out of the tunnel at Wembley – there was a crescendo of noise from cheering crowds and the atmosphere and sense of expectation were terrific.

And then I saw Stanka, a Slovenian friend, standing on a podium. I called out, she saw me and then immediately fumbled for her camera. And so I found myself stopping barely five metres after the start while she lined up her shot, and waited to pose for a photo – hardly serious running behaviour and not recommended for anyone with PB ambitions! With this and slow progress generally through the pack of runners early on, I quickly confirmed that this was going to be a half to savour rather than a personal record attempt. I was here for a good time – but not in the Garmin sense.

And there was so much to enjoy. All the way round the course, people had turned out to watch, to clap and to cheer: ‘Dajmo! Bravo!’ (Come on! Well done!) There were banners to encourage friends, people with klaxons and old-time football rattles. Imagine the reception BvH runners received around Bournville at last week’s Birmingham half – Ljubljana was like that virtually all the way round and I could feel myself smiling constantly with the sheer bonhomie. The kilometres flew past so quickly (in my mind that is – I really wasn’t going for it pace-wise) that when I passed the 18km sign I remember feeling disappointed that there were only another 3km of this joyful experience left.

The course was fairly flat. I’d seen on the event website that the route would take us through Tivoli Park, which is a hilly oasis of green a stone’s throw from the city centre (as large as Sutton Park but as close as Five Ways). In the end, though, we barely had to climb at any stage.

There were plenty of refuelling points offering water and sports drinks, but also bananas, mandarins and even chocolates (Birmingham Half – take note and copy).

The largest foreign contingents of runners were from neighbouring countries, especially Croatia and Italy, and from other parts of former Yugoslavia. I saw Finns and Germans, too. Not forgetting the 77 other Brits. These included 18 women from a running club in Newton Abbot in Devon. After discovering three of them soon after the start I came to recognise their club kit from a distance and as I worked my way forward I greeted each new pair or solo member of the group with ‘Good morning Devon ladies!’ and chatted for 100m before moving on. After one encounter, as my Bournville Harriers vest came into view, I heard a chorus of ‘We love your chocolate! ‘

Halfway round I was taken aback to see a guy with ‘Moseley’ across his running vest.  Thinking I might just have discovered another B13 resident running in Ljubljana that morning, I made contact. However, the wearer was Slovenian and it turned out this was the name of a famous American basketball coach (the slamdunk game is bigger than football in Slovenia).

This year Ljubljana is marking 2000 years since the Romans came. And a group of runners chose to reference the occasion by hoofing the streets dressed as centurions and bearing the slogan ‘SloVENIa VIDI VICI’.

I had this irrational fear that the half marathon finish wouldn’t be marked and I’d find myself heading out on the full marathon course but I needn’t have worried. Ljubljana is a superbly well-organised event. Sure enough, as we approached Congress Square where I’d seen that Finish arch the night before, arrow signs kept me on course for 21km. As I turned into the home straight, I heard the tannoy announce ‘Velika Britania!’ and then in English ‘A runner from Great Britain!’ and I felt an old-fashioned pride as I picked up speed around the corner, into the square, past the grandstand and over the line. One year in the planning and I’d completed the Ljubljana Half. Chip-time: 2:1:24 – slower than Birmingham, but I’d set out to have another kind of good time – and I did.

Like the organisation and the crowd, the weather had been perfect – mild and sunny, although this event often takes place in snow (the clue lies in ‘Alpine’). It’s an easy course, though. I hope to come back next year and may even go for the full marathon. Anyone want to join me?