One could have taken it as a bad omen that I turned up to collect Laura an hour earlier than I’d said in my email.  I had written 8.50am, but surely by now she would know telepathically that I really meant 7.50am.  Luckily she was pretty much ready and didn’t give me a hard time for my massive error.  We had chosen the Shakespeare Raceway event to test our 10k times as it is a flat, fast course and not too far from home.  I got a 10k PB before Christmas and I wanted to see if the cross country season would improve my speed and Laura had come to the end of an intensive training block at Camp Syksie.  Conditions seemed perfect.

As we got closer to the venue, the sun came out and I started to panic.  My last 10k had been at night with sub-zero temperatures and, like a forced rhubarb, I started to think I would only be at my best in the cold and dark.  Although the sun was out, it was still pretty cold and windy, so I calmed down a bit.  There was plenty of parking at the venue, so we picked a good spot and headed to the registration prefab.  The number collection was straightforward but the bag storage area was tiny so we decided to leave all our stuff in the car just before the start of the race.  There were plenty of port-a-loos and permanent toilets available although the latter ran out of water just before the race.  It wasn’t totally obvious where the race start was so we asked a friendly marshal and headed off for a recce.

For those of you who have never been to the Raceway, based on the Long Marston airfield, it is a very strange place.  Bleak, broken tarmac stretching out for miles, old fashioned tannoys omitting strange whistling noises and the odd 70s MOR track, rotten wooden bench seats and car racing banners from the 70s, were all a bit too ‘Dawn of the Dead’ for me.  However, the excitement from the marshals and other racers was enough to snap me out of my zombie apocalypse frame of mind.

There were a number of races scheduled for the day, starting with a 1km race for kids at 9.15am and the 5k, 10k, half-marathon and marathon races all starting at the same time at 10am.  After a quick change and an even quicker warm up, we headed to the start line.  We had all been given colour-coded numbers depending on the distance we were running but none of these were visible from the back.  When the race started it felt a bit strange not knowing who was running your distance so we knew we would have to rely heavily on our Garmins to keep an eye on pace.  The organisers had thoughtfully traced a yellow racing line around the course which would keep the wandering off to a minimum.

The course is almost star shaped with dead-turns at every ‘point’.  The water station was located just after the start line with volunteers already holding out cups of water.  I noticed a separate table where the runners doing the longer distances could leave their own bottles – just like the Olympics!  As the course was so flat and open, whenever you were running toward the top point of the star, there was a strong head wind.  At the 1k mark I could hear continuous gun-fire, which given my earlier thoughts, seemed entirely appropriate.  No one else seemed to mind and I still don’t actually know where it was coming from.  The shock of the gunfire was only surpassed by my surprise at seeing a flock of sheep on a grassy verge at the 2k mark.  What is this place?! For the first few kilometres I was feeling great and ahead of the pace I had set myself.  I was anxious about coming a cropper later on but slowing down too much made me feel worse.  I decided to go with it and see how I was after 5k.  The head wind wasn’t bothering me too much and then all of a sudden I was heading back to the start/finish, the race was flying by.  The surface was broken up in places but they were easy to avoid so not a massive problem.  On the finishing straight, the 5k runners were directed off to the right and the rest of us had to follow the bean bag path to the left.  The surface was quite new here and felt lovely to run on, I started to get excited about running down it again for the finish.

On the second lap the dead-turns and the head winds were starting to take their toll but I didn’t slow down too much.  Laura and I both thought the wind was at its worst at the 3k/8k section.  I willed myself through to the last kilometre with the wind at my back.  The finishing straight felt much longer this time but Laura was at the side lines to cheer me on.  I finished almost a minute under my previous PB and Laura had knocked a whopping 6 minutes off hers.  She had really pushed it the whole way round, running two fast and almost identical laps.  She even managed to beat her 5k PB, headwind an’ all! Both of us were only two seconds of another big milestone but we tried not to let that dampen our excitement.  We headed to the results station where you could type in your number and get a print out with a break-down of your results.  Going through them we realised that Laura had come first in her age category and 2nd female overall.  To the prize hut!

There was no goodie bag but the medals were really nice and teal! The one food van was selling the usual bacon sarnies but the tea was awful – scummy and lukewarm.  On the way out I managed to drive straight in to the only patch of mud in the park and got stuck.  Luckily Laura was feeling strong and with the added kindness of strangers, we escaped.

Overall, both of us really enjoyed the race.  Although we didn’t see Josephine on the course, according to the results, she also had a great race.  I think the course is perfect for the shorter distances as I’m not sure how I would have coped running around eight times for the marathon.  It’s definitely a race to do if you’re there for a PB and not the scenery. 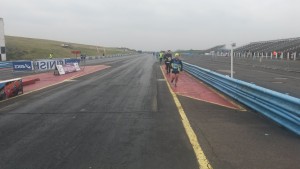 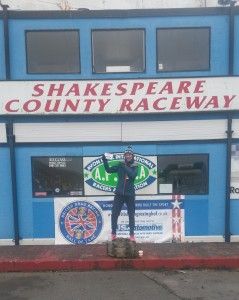