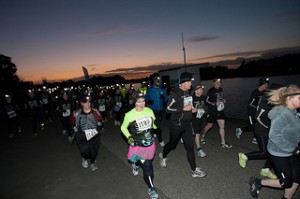 I arrived in plenty of time as I discovered I had not registered a few days earlier so I registered on the day this was well organised just choose your distance 5 or 10k, choose your t-shirt size and that’s that.

I asked for a small t-shirt(in Nottingham small is a bit bigger than me) anyway it was freezing and a long sleeve top helped keep me warm! As it was a spooky sprint there were various ghosts and ghouls about in fancy dress with a prize for best costume and some were scary!

There was a DJ from the local radio who seemed to love playing thriller with the occasional bit of time war thrown in all in the spooky spirit.

At 5pm there was a 1k kids race, they were all dressed up in costume and was fun to watch some of them were mighty fast for little ones, maybe some stars of the future?

At about 5.40pm we were assembled for a warm up by this point I was froze and just wanted to get going the warm up involved more thriller moves or in my case jumping. I knew by now and also as I have done this race last year there was some competitive runners here well it is home to perrinport(?)running club, I could hear a few saying times they were going for, of course I had a time in my head only one week since the bham half I was going to be happy with 50mins. Last year I did this in 57mins.

We were ushered to the start and told to be careful for things in the woods! There was two races we were to set off first 10k then the 5k about a min after they took a slightly different route but met up with us. It was dark 500 runners running around a lake with head torches. I was really just trying to keep warm the first 1k then once I had started getting a pace I found the experience quite relaxing for a bit a run in the dark around a lake it seemed very peaceful and calming.

I got to 3k where we were directed over a bridge and alongside a canal with some boats on thinking back to the start and told to be careful of what might jump out in the woods I decided to run a bit faster, it then went round into a little part that seemed to be like the Lickeys where I did struggle to see I’m not very good at seeing in the dark anyway (well who likes carrots?).

After this we followed the path round and back towards the start, where the crowd were sat with the DJ saying which runners were coming past. Getting a cheer from the crowd I kept going enjoying the spooky experience then I sore two little green eyes coming towards me which was definitely spooky it was only on getting closer I could see it was a random dog walker going the opposite way to all the runners and the eyes belonged to a big shaggy dog!

By this stretch I had put some distance between the runners behind me I decided I would try and catch up with runners ahead as it started to get a bit lonely in the dark on my own with just a head lamp and I wasn’t going to wait to be caught up! So that was it I caught up with one runner then over took several others by now I was getting a bit competitive, I ended up running with four guys one was a ghost!

After the second time through the Lickeys part, well it reminded me of the Lickeys I new I was coming to the end as I came back onto the path that follows the lake I heard the DJ say a time for a 10k runners who had just come in I realised I ran faster than I thought so as much as I could tried to sprint(which is something I need to work on!)to the end the ghost left me behind but not too far! I came through the finish in 47.44 a PB in the dark! I was extremely happy with this plus 10 mins off last years time.

The finishers bag consisted of a medal ,sweets, water, banana and some night cream. Overall it was a fun experience and a race I dedicate to my dad who has Parkinson’s.