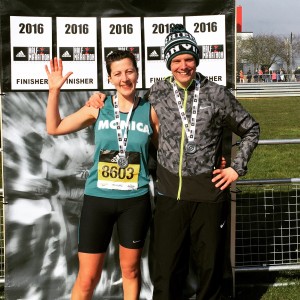 Mat Pollard Reports: Following the BvH Awards Night Quiz with a round featuring quotes from race reports, the members of team ‘Magnificent 7’, Quiz Champions… agreed that this year we would all make more effort to write more race reports. This is my first ever race report; I’ll try not to get too carried away!We left Birmingham with the sun shining bright and hopeful of a good run. As we approached the Silverstone Race circuit it got foggier and foggier. It felt like the weather might play a part in this race as so many people who have ran at Silverstone before had told us. Fortunately the sun broke through the fog about 15 minutes before the race started, bringing along with it a few cheers from everyone. The race magazine suggests that the latest you should aim to arrive is 10:30am for a mid-day start and as we got nearer it was pretty easy to see why as the queues of cars were building up on the surrounding roads by about 10am. (I heard from a couple of other runners that the car park is also problematic when leaving too but we didn’t really hang around to find out.) A relatively short walk from the car to the race village which had all the usual coffee shops greasy burger vans but also the Adidas shop selling this years London Marathon training jackets which are almost a perfect Bournville Teal! The queues for the toilets looked a bit mental for 10:15am, especially around the car parks and the first set next to the race village, but surprise surprise, there was about 30 sets of luxury flush loos just around the corner with no one queuing up at all.As the race started, I had to make an extra effort not to fly off at some outrageous speed. I naturally lined up on the front row of the start line. Much faster runners surrounded me and as the course has super smooth tarmac and is gently downhill to start, you shoot off feeling like you have massively underestimated your race pace. A couple more turns, a gentle slope and that breeze I didn’t think would make that much difference blasted straight in your face. It soon helps you realize that it was going to be a bit tougher than I first thought.There is an almost eerie silence for the first couple of miles, you run away from the spectators, it all felt so serious and was confirmed when I tried to make small talk with surrounding runners who weren’t really having any of it.There isn’t a whole lot to say about the rest of the race, it is fast, hillier that you might expect and the wind seems to be magnified as the course is open in places. You might see the odd dinosaur or man dressed as a carrot run past on other sections of the course because London Marathon World Record Attempts are asked to come to this race as part of their training.There are 3 or 4 water stations and a couple of Lucozade stations along the way and plenty of friendly marshals. Most of the supporters are in one area but you seem to pass through parts of this a few times, which really helps.Considering it looked like it was going to be dark, damp and foggy. The sun shone down on us and I even managed to get the slightest of sunburn.Our Results:Monica Baptista – 1;39:52 – PBMatthew Pollard – 1:23:20 – PBGoodie bag:MedalGraze snack packBeef JerkyBuxton WaterLucozade drinkMango/Pineapple dried fromMen’s Adidas deodorantCotton Finished T shirtPorridge

8 Replies to “Silverstone Half Marathon”