Lesley Pymm reports:  This is a run that I had never done before and probably would not have entered had I known the date of the Leafy sooner.  Anyway, enter I did and duly turned up at Rodbaston College near Penkridge on a day that turned out to be better than forecast.  I had expected to get wet, and was not disappointed, but most of the wet came from what I was running through, not from the sky. 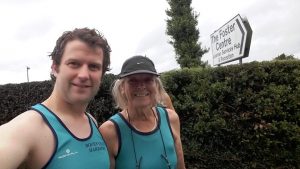 The only other person from Bournville was Tim Evans.  I knew he would be there from facebook and we found eachother for the obligatory selfie before the start.  The race briefing was humerous and I was not sure if the reference to horse jumps was a joke or not.  The atmosphere at the start was good and I was looking forward to it.

Off we went along a drive before turning off and along a mucky track.  I found one of the early paths quite difficult as it went alongside a field of corn on the cob – and some of it was over the path.  Quite a trip hazzard so I made a point of watching my step there.  Soon we came to a field where my question was answered – there were horse jumps.  They had said that you could go round them and I ran round the first one that had looked quite high.  Had it been a matter of life and death, I would have got over it – but it would have been very ungainly and probably quite painful.  The second one looked easier, but then a man in front of me went flying on it.  I then decided that discretion was the better part of valour and I’d just give them all a miss.  To be fair, the man who had problems had already gone over on a flat section of the event, so maybe it said more about him! 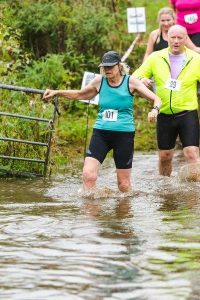 A young woman running close to me said that she was worried about the water crossing as she was quite short and she may drown.  When we got there, it was up to the top of my thigh, so probably her waist.  She got through OK and we both carried on.  There were a few more horse jumps that I ignored and then we were at the boggy bit.  It was wonderful.  There was a woman near me who was having to be dragged out of it by other runners.  I managed to get over it, but was literally crawling in mud at some points.

Out the other end and there were some very wet, and boggy fields to get through before we finally ran along tarmac to the finish.  I was soaking wet and covered in mud and I had loved every minute of it.  It was very well organised with good facilites although there were no showers, unfortunately. Please do not arrange the Leafy so that it clashes again next year – we think it is on 4 Ocotber and Rodbaston is in my diary already. 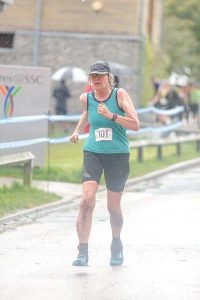