Primo Zavoli (Cicci), Simon Newman and myself made the trip over to Italy for a short break, to visit Cicci’s place of birth and to take part in the Rimini Half Marathon (StraRimini was the local name for the race). The city of Rimini is a popular seaside resort located on the northeastern coast of the Adriatic.

The race was an early start from the picturesque town centre, with a register on the day process.  The race organisers would only let Italian club runners into the competitive race and the rest of us were part of the fun run, so no official chip time, however for €2.50 and a t- shirt this was excellent value for money. Maybe charging a few extra euros per head would have paid for extra toilet facilities, as these were limited prior to the race and led to the inevitable public side streets being used instead!

The sun was shining and the temperature was probably heading towards 25 degrees just before start time and so the sun cream and shades were on. Our race strategy needed to take a relaxed view on PB status!

We were off and the race took us out of the old town and down to the coastline, Simon and myself stayed together for most of the race, really enjoying the scenery and seeing the locals cheering us on. Cicci had advised us to go ahead as he was looking to be slightly slower than ourselves.

The route takes you along the coastline, up through the harbour, out of town, through parkland and then back into the city for the finish. A lovely run with loads to take in on route.

We passed a runner who was running backwards, which was a good effort, not sure how you train for that though.

The heat certainly affected me with a few miles left, I felt my legs getting heavy and overall more tired, it may have been a result of the generous helpings of pasta I had eaten at Cicci’s sister in law the day before!

Simon was kind enough to stick with me, he could have gone on, but was happy to finish at the same time. We ended up crossing the line in just under 1hr 45 mins, which is a pleasing time under the conditions.

Cicci completed in a very respectable time of just under 2 and half hours, especially as he is only just back from a long term injury.

We had an awesome time in Rimini, staying in Cicci’s family home, and being looked after by his close family. The hospitality from his brother and sister in law was amazing. Non stop eating, consisting of freshly cooked pasta, large steaks, lovely salads dripping with that lovely local olive oil, local fruits, loads of espresso, family vino and of course fine company.

A great place to visit, with long sandy beaches and sea to swim in, also of interest is San Marino, which is only 30 mins away, which we were lucky enough to be taken to. Famous for it’s tax haven, rubbish football team, and almost F1 (not quite in San Marino, in Imola which is outside the border).

A big thanks to Cicci for being an amazing host, especially for organising our tour and supplying on-going translation whilst with his non-English speaking Italian family! 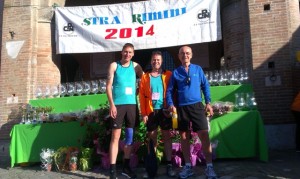 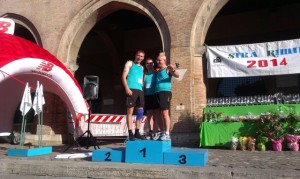 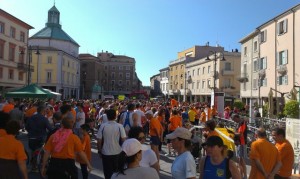 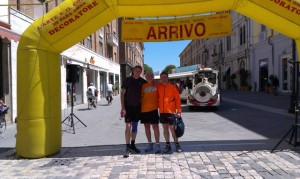 One Reply to “Rimini Half Marathon report, by James Gittins”