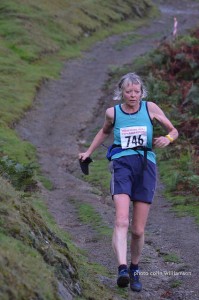 Lesley Pymm reports:  This was the final run in the Shropshire Summer Fell Running Series.  I have not done many of them as I had such problems with my knee, but was really looking forward to this one.  It was based at the Ragleth Inn in Little Stretton.  I thought it was the Ragleth Hill Race i.e. it went up Ragleth Hill, which looked a bit difficult as there were two main roads and a railway between the pub and the hill!  Anyway, I was sure they had it sorted.  It was when I got there that I saw the map and realised that we actually run up Callow Hill (twice).  No roads or railways then!  Just before the start, the heavens opened.  The organiser announced that waterproof jackets were mandatory kit.  This caused a bit of confusion as a number of runners did not have full kit with them, and they were running round borrowing jackets and stuffing them in pockets or knotting round waists.

We congregated at the start and the organiser explained the FRA rules to the assembled runners and that they must get into the habit of bringing full kit with them to fell runs and that, next year, people without bags and kit would be disqualified/not allowed to start.  By the time we got started, I had lost my signal on my watch, so no splits or accurate distance.  It is all a bit arbitrary on these events anyway.  The official distance is 6.5k and 460m ascent.

We started on a bit of road for 100m or so, then through a stream and off road.  It soon started to climb.  I was last at this point but could see two women ahead struggling on the hill.  I managed to pass them and was going quite well, until I got to the top.  The sun was out and it was low.  I couldn’t see a thing and it was so difficult to run.  I shoved my hat on low to try to shield my eyes from the sun, but it wasn’t much use.  I could hear someone behind – it was one of the women I had overtaken on the uphill.  I moved out of the way for her and saw that she was wearing sunglasses – very wise.

Then my hat blew off and I had to run after it – at least I could see in that direction.  Clutching the hat, I turned round again and ran towards a marshall who I could vaguely make out.  He told me to run along the track.  I couldn’t even see the track, but trotted along in that direction.  Eventually I got to the downhill that I had been warned about at the beginning.  It was very slippery as it had been bone dry and the recent rain has rendered it greasy. 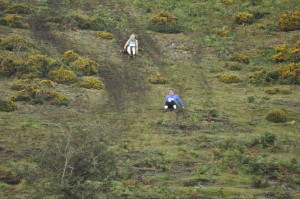 The woman ahead of me went down (literally) and I heard her scream and laugh as she went down on her backside.  I tried to stay upright, but decided that it was safer to follow suit.  It was not elegant but the only real problem was that there were gorse bushes and my hands were picking up bits.  I was overtaken here by the other woman who had been behind me as she shouted about the ‘curse of the tail runners’ i.e. the front runners have made it even more slippery!

I started climbing and managed to close the gap on one of them – who I thought was probably in my age group!  I passed her before the top and then knew it was just a downhill to go – but she was better downhill than me!  I found this downhill easier than the other one and did catch up with another runner, but she wasn’t having that and took off.

I finished in 1.03.40!  I won my category although the woman behind was actually younger!  A great run, really enjoyed it.  When I got in the bath later bits of Callow Hill were floating around in the water!  Just looking foward to the Winter Series now.