Suzanne Bunn reports: ‘Only mad dogs and Englishmen go out in the midday sun’ unless of course you are four fearless female Bournville harriers! 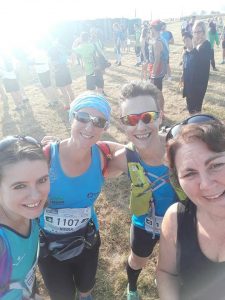 It was a hot and sticky day in June and what better way to spend it than running across an exposed ridgeway in 30 degrees heat for 31 miles…unless of course you were totally mad and had decided to tackle the full 62 miles! What type of mad person would do that?

Of course the temperature was only in the low 20s when we started at 7.45am and the shade of the trees on the climb up to the ridgeway was a deceptive start to our day.

But the shady inclines held their own dangers, the exposed roots felled so many runners leaving them bruised, bloody and battered from the contact with the cracked and hardened ground. 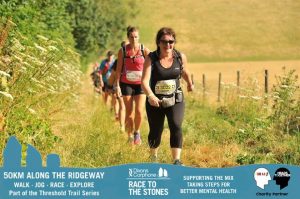 Feeling lucky to have not been victim to the roots, which seemed to move like something out of a Harry Potter movie, I weaved my way out and on to the ridgeway and entered the field of dreams.  And what a sight.  The golden glow from the sun exposed corn led on for what looked like miles and after a quick ‘runfie’ a gentle run down towards the second part of the fields made you seem like you were in the opening scenes from Gladiator.  Obviously you had to run your hand through the corn like you were the hero Russell Crowe… or was that just me, thankfully others were too busy taking runfies to notice my strange behaviour.

The food stations were amazing….the variety of fruit on offer on its own was enough to amaze most people.  Of course each pit stop was another runfie opportunity not to be missed and uploaded with times so everyone on Facebook could track you…well at least those who hadn’t muted you because of your previous narcissistic running posts, and of course it was proof that you were actually there.

Then disaster struck just over half way and 3hrs and and 25 minutes in I disappeared like Alice in Wonderland down a rabbit hole whilst staring at the very attractive river.

Wrenching my ankle out of its tight enclosure I limped to the next station.  It is surprising how much hotter and tiring walking is than running when you had previously enjoyed the steady pace you had created. After 45 minutes at the station and patched up by medics I felt relieved I could continue unlike so many others who sat nursing far worse injuries and sunstroke.

The heat was now at its height and your arms felt like they were burning, but ultras are so different to any other races and the camaraderie of all involved pulls you through. So many were now walking, feeling the effects of an unusually hot day and this meant plenty of time to chat.

It was in the final 7k I met  one of most inspirational people I have ever met.  Lauryn….a serial ultra runner battling terminal cancer, running for Macmillan.  It was then you realise the true beauty of ultra running….it is not the running, the completion time,  the scenery or the medal which is what lures people in to keep running them it is the true grit and determination you have to conjure up and the people you run with which makes you run again.  And of course like Lauryn the promise you make to others to raise funds for phenomenal causes.

I ran race to the stones for me, to test myself, to see how far I could go in only a year from starting with the beginners’ and to raise money for Street Child, but it taught me so much more; it reminded me of the kindness of strangers, the compassion of others, the resilience which comes from deep down and showed me how wonderful the world of ultra running is.

Will I be back…of course, I have already booked for Exmoor ultra in October.