Andy Hoole reports: This was the 43rd running of the event and, having grown up less than 10 minutes from the start line, it has been one that I’ve always wanted to do but have always been otherwise occupied. This year however I signed up nice and early (which was just as well as the race was full with about six weeks to go) and with my parents for moral support, found myself milling around with 500 fellow runners at Hillfields Primary School waiting for the off.

Warning signs were there from the start, with the pub next door putting out a large sign refusing entrance to anyone with muddy shoes. The course itself was listed as 6.75 miles – definitely a case of working out the route first and then measuring it as an afterthought – and described as one third road, one third paths and a third through fields. Recent weather however had rendered it about one third road and two thirds ankle deep mud (at best) so any remote thoughts of a proper race evaporated as we set off on the initial lap of the school playing field which had already started to churn up quite badly.

Emerging onto the road we passed some vocal support lining the route before turning to start the first climb of the race, around 200 feet over about a mile. There was some jockeying for position as the course narrowed from road, to a track and finally a single file path as we crested the hill and began the first descent. This involved crossing a number of farmers’ fields and was particularly challenging, with the sheer amount of mud coupled with the gradient of the fields making progress difficult. A few stiles to negotiate slowed things to a crawl and it was a relief to pass onto a road for the next part of the course. 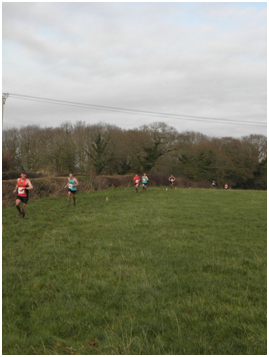 Next came the big challenge, the ascent of Parbold Hill itself, another 200 foot climb. Having struggled up it in a car on numerous occasions I knew what to expect and it was very much a case of gritting your teeth and following the runner in front. The field stretched out over this section and, having reached the top and some cheers from a crowd outside the pub at the summit, we turned and went back to the mud.

The final two miles were spend zigzagging along the perimeters of various fields desperately trying to stay upright in the boggy conditions as we headed back downhill. Again, there were a number of stiles and gates as well as two very enjoyable jumps over fences made out of hay bales. One ominous note was sounded by a marshal who directed us down a covered stretch by warning us to “go slow on the next bit, there’s loads of rocks just under the mud”!

Finally, the end was in sight as we waded through a stream before turning back onto the road for the final sprint to the finish. I felt quite pleased to pass one runner just before the finish as we re-entered the playing field and crossed the line. My time was 54.22 for 61st place, but I wasn’t particularly bothered, just pleased to have completed the challenge of such an enjoyably daft event.

The event was extremely well marshalled and supported with many runners returning every year for the challenge. I think I’ll be joining them to see what conditions the course has in store for 2014. I would definitely recommend it to anyone unfortunate enough to find themselves in West Lancashire in February – just make sure you have access to a good shower! 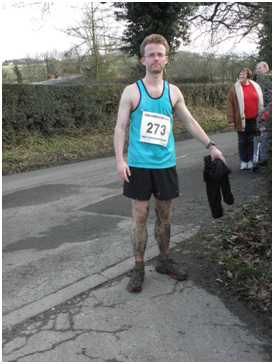