I agreed earlier in the year that I would captain the men’s masters team for this annual event. I was happy to. I really love the atmosphere at road relays. Of course, we all want to do well individually but club relays are an opportunity to see, cheer and appreciate the efforts of club mates on their respective legs. Not an option in the normal gun to tape races.

With a magnificent 22 runners agreeing to run I was able to pick three teams, according to the many rules on the BMAF website!! (M35 8 stage, M45 6 Stage and M55 4 stage). Each stage is 3 miles. Sadly, as no B teams are permitted, Oliver Kirkland, Paul Gorman, Mark Doudican and Simon Newman, oh and Andy Hall (more on that later) weren’t selected. They were all very generous in offering to run if needed. Much appreciated. I wasn’t able to fill all 6 stages for the M45 team but the 4 who did all were happy to run “incomplete”. By running and competing so well they absolutely made our team, “complete”. On a separate note, the relays are as much about participation than having to be the “fastest”. Please do put your name forward. Even if you are not selected come along and be part of the awesome supporters who are as influential as anyone running.

I know from the experience I have gained at BvH over the last 18 months that these masters events are massively competitive. Scanning the previous results, the winning teams are ones who have runners who all can run sub 17 for 5k. That is for M35-44 and M45-54. Outstanding. So the goals were to do the best on the day and pull together as a team.

First, in their very own M55-64 team of club legends – smashing start on leg one by Ed Hartley in a new M60 club age record. A great debut from future legend Steve Doswell, sprinting up the final hill, handing over to the relay master Martin Foster once more representing the club so well and anchored by Barrie Roberts setting a new M70 club age record, his fastest time for 5 years. Together they set a new club record for the M55-64 and were 16th on the day. Well done guys.

Next the incomplete M45-54. In the battle of experience, Andy Wheeler got the team off to a fast start getting into his running really well in the second half, and was just eclipsed on time by Dan Wilson running very strongly on leg 2. Antony Stewart and Mark Cooper made promising debuts, demonstrating their rapid improvement, on legs 3 and 4. I hope they enjoyed the experience as much as we appreciated them joining in the event. Thank you to this team for their enthusiasm and tenacity in taking part.

Finally the M35-44 team. 8 stages is a tough ask but these were quickly assigned. Plus I selected 2 1st reserves. Andy Hall came along on the day, Olly Kirkland was on the end of the phone. Thanks guys.

To the race. The forever fast Paul Thompson, ran a blistering first leg, handing over to Stuart Pearson, running his fastest ever leg time by some 25s. John McKeon ran his debut masters leg, showing rapidly improving form, just a fraction slower than Stuart. Up next, our International Track Champ Rob Andrew. Initially on leg one, Rob kindly offered to run, despite injury, doing so in a very fast time. Next up Sam Chatwin ran a new course PB, half a minute faster than 2012, just edging Rob on time. During Rob’s leg I received a message that Sean Rose had regretfully mixed his dates up. Aaargghhh. The hero of the hour was Andy Hall who didn’t flinch at stepping in and ran a strong debut leg for the club. This was despite carrying niggles from his recent marathon and half marathon. Back to the submitted running order…Dean Parker ran our fastest leg of the day, overtaking 2 clubs, including BRAT who had been ahead of us all race. Dean’s 5th occasion running sub 16 minutes! This left us in 11th place. I was last leg. Sadly we weren’t going to finish top 5 (4 mins ahead). I just wanted to help set a new club record. I worked out I had 16 minutes as Dean stormed in. An uncomfortable, and at times sharp pain in my left foot right from the start. Finished in 16m 10s but gave it all to get close to the record. Discovered afterwards that an unclosed safety pin has punctured my shoe and into my foot. Nice bloodied sock too. I do like being at the sharp end I guess. Thanks to Barrie and St John Ambulance. I think I will live. And we set a new club record..by 5 seconds!!!

Special thanks to Stuart for agreeing to bring the tent. It was needed and appreciated. Super support from none running club mates, friends and family. Sarah Rock brought extra pins and treats and John McKeon brought extra water and bananas.

Photos, still being uploaded as at 19th may – here. 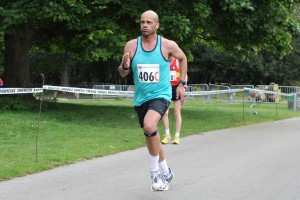