Graeme Beavers reports: The ‘clocks going back’ weekend in October saw a couple of BvH heading north to the Howgills (amazing hills just to the right of the Lakes) for the annual Original Mountain Marathon. 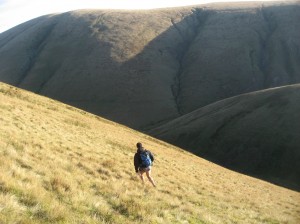 Andy Wheeler and I independently entered but bumped into each other at a rainy mid way campsite. For those that don’t know it, the idea is that in pairs you race over wild mountain terrain, navigating in an ortienteering kind of way around courses of varying lengths (the elite guys do approximately a fiull marathon length each day) whilst carrying your camping gear and food etc for an overnight camp at a specificed remote valley.

Apart from toilets and mucky water at the campsite you have to be totally self sufficient. Needless to say if you like this sort of thing the event is a must-do.

Although there are other versions of this format the OMM is the biggie – over 1000 people across 8 courses descended on a dark but to-be-sunny Sedbergh on the Saturday morning. My race partner Tom and I arrived around 7am to register and make our way to the start for the pleasure of heading into the hills at 8.30. Start times are staggered to minimise following.

Saturday was windy and cold, bright and clear making the navigation reasonably easy but boy was it cold on the ridges with the wind howling through you. Hat and gloves essential, although we were one of the few teams to wear shorts! After a great day on the hills, apart from some knee problems for the last couple of hours, we pitched up at the canpsite and set ourselves up for the night.

Several rounds of super noodles and lightweight snacks of choice (beef jerky, cashews, small brownies as a heavyweight treat) over the next few hours passed the time along with chatting to other competitors and checking your results we snuggled down for the night. Not before the annual ‘smug’ ritual of looking out for people who had obviously had an epic day and were making their way down the final hill by headtorch and who must have been out for 10+ hours. Grim.

Overnight we were 60th in the C Class and Andy and partner were 85th in the Long Score.

The predicted rain arrived through the night to make it a damp and uncomfortable start. This, with cloud low on the hills, aching legs etc saw a few teams retiring immediately. Up on the hills it was all set for a tough day, a harsh strong cold wind blowing rain constantly, with tricky navigation in the low visibility.

No following today – it was the real deal! So, with heads down and jaws set we adopted the ‘only a few hours and then it will all be over’ attitude.and set to our task. Several hours later the final kilometre run down through soaking wet fields to the finish was joyous, with hot soup, a meal back at the Sedbergh school and some dryish clothes at the car to bring smiles back to our faces. The pain was again soon forgotten. A great weekend.

Both BhV teams had a strong second day, Andy and partner in particular finishing 26th on day 2 to end up 47th overall. Tom and I were 52nd on the day and 52nd overall. My knee was still giving me jip but several ibuprofen took the edge off.

Plans already being made for 2013…